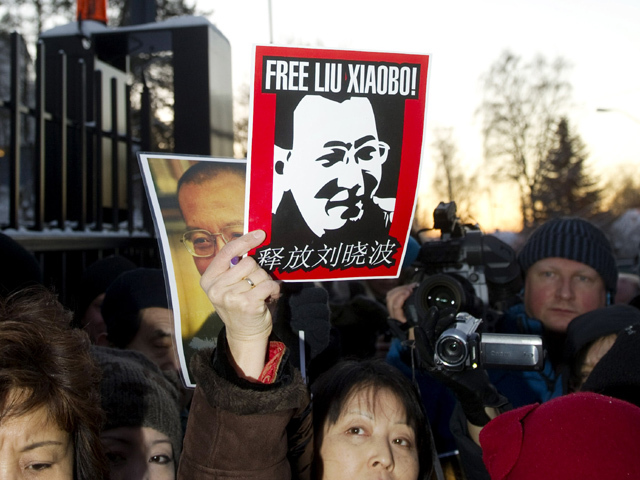 Liu Xiaobo is hardly a household name inside China. Most people have never heard of the man who is the first person of Chinese origin to win a Nobel Prize while living in China.

Liu is a political philosopher who first angered the Chinese government in 1989, when he was involved in orchestrating peaceful pro-democracy demonstrations in Tiananmen Square that ended with a military crackdown.

Decades later, Liu co-wrote Charter 08, a petition calling for multi-party democracy in China. He has spent much of his life in and out of prison, often living under house arrest.

Within the small community of people who are familiar with Liu Xiaobo's work, not everyone is comfortable with the idea that the Nobel was given to a single Chinese activist.

Many support Liu Xiaobo's efforts to promote human rights on a philosophical level, but believe others who have sacrificed their freedom — and sometimes their lives — also deserve recognition.

The U.S. Congressional-Executive Commission on China keeps a database listing 1,452 current political prisoners in China, although researchers admit that list is far from complete.

Indeed, in October 2008, many were confident that Chinese dissidents Hu Jia and Gao Zhisheng would be named joint winners of the Nobel Peace Prize. Their stories are sobering.

Hu Jia is serving a 3.5-year prison sentence for "inciting state subversion". His crime? He co-authored a public letter criticizing China's failure to boost its human rights record ahead of the 2008 Olympics.

Hu is also known for pushing for justice on a whole range of subjects in China, from rights for those living with HIV/AIDS to saving the Tibetan antelope. Although his family worries that Hu Jia is now suffering from liver cancer, Chinese authorities have refused to release him on medical parole.

Gao Zhisheng is a self-taught human rights lawyer who made a career fighting on behalf of China's most vulnerable. He was kidnapped by security forces in 2009 — a move that terrified his family.

"There were over 100 police always watching our house. Our home was like a prison," Gao's wife, Geng He, told CBS News. Geng He and her two children fled to the United States after Gao went missing. He briefly resurfaced in China last March before disappearing again. Many now fear he is dead.

Still, no matter whose name is on the 2010 Nobel Peace Prize medal, most people fighting for human rights in China believe the award will help to shine a spotlight on their work.

"I think the Nobel committee has made it very clear that, although the award is specifically going to Liu Xiaobo, that actually what they're trying to do is honor a whole community of people like Liu who have engaged in similar work and who are all, by virtue of this award, being acknowledged and encouraged," explains Sophie Richardson, Asia Advocacy Director of Human Rights Watch.

When Liu Xiaobo's wife visited him in prison to tell him he had won the Nobel Peace Prize, he told her that he was dedicating his prize to the "martyrs" of 1989's Tiananmen Square protests.

With this gesture, perhaps China's activists can all celebrate Liu Xiaobo's moment of recognition.