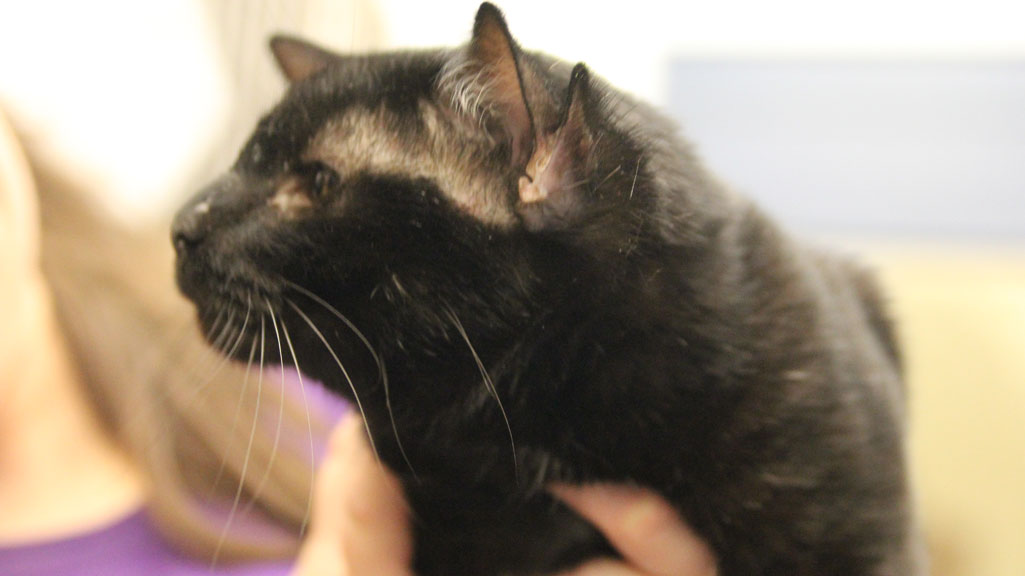 Cats get lots of cuddle time with volunteers and staff at the Western Pennsylvania Humane Society. But the real deal is to land a permanent home. If you have a suggestion, they're all ears. And in one case, we do mean all ears.

Two in front. Two in back. The four-eared feline known as Batman (apparently Catman was taken) is a rare breed indeed.

According to the Humane Society, 3-year-old Batman was brought to the facility after its owner could no longer care for him.

The Humane Society says Batman came from a home with several pets and is very friendly.

"He's a really cool cat," says shelter veterinrian Dr. Todd Blauvelt. "He's really nice. Really affectionate. He has a very rare congenital defect. It doesn't really affect his hearing. He can hear just fine. But he has two little ear tufts behind his ear. I've never encountered that. We had to look it up. We found a couple of cats in the past decades, it was noted."

The first four-eared feline we could catalogue is Toots, who lived in Ashtabul, Ohio in 1938. She gave birth to two other four-eared cats. Batman has been treated for a minor respiratory condition. But the doctor says it's nothing catastrophic. As for the hiss-tory ...

"Literature says they can have an undershot jaw, or have some other abnormalities in the face, but he doesn't seem to have it that severe," the doctor says.

He does not hear in stereo. In fact, the back ear flaps do not come with auditory canals. But this guy is a purr-fect choice for a furr-ever home.