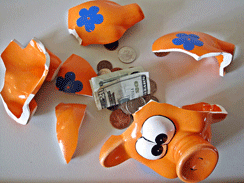 (MoneyWatch) While liquidity is usually discussed regarding bonds, a recent paper shows that it may have a significant impact on stocks as well.

Liquidity is the degree to which an asset or security can be bought or sold in the market without affecting the asset's price. Liquidity is characterized by a high level of trading activity and small spreads between the bid and offer. Because it's safer to invest in liquid securities than illiquid ones, illiquid assets should have higher expected returns (a risk premium) as compensation for their incremental risks and higher costs of trading. This concept of a liquidity premium is well documented in the academic literature.

However, much of the research has been focused on bonds. Perhaps the most well-known example of a liquidity premium is the fact that what are called "on-the-run" (the most recent issue of a particular maturity) Treasuries trade at lower yields than comparable "off-the-run" (previously issued bonds with the same original term) despite being longer in maturity.

Can you capture the liquidity premium?
How liquidity risk affect global stock returns
Like pain? Check your stocks more often

In a normal upward sloping curve, longer bonds should carry higher yields. For example, a 30-year Treasury bond with 29.5 years remaining to maturity will have higher (not lower) yields than a newly issued 30-year bond despite having a shorter remaining term to maturity. Trading this "anomaly" was one of the strategies deployed by Long-Term Capital Management. Unfortunately for the failed hedge fund, it wasn't an anomaly but a risk premium.

Zhiwu Chen, Roger Ibbotson and Wendy Hu, all from Zebra Capital Management, studied the effect of liquidity risk on stock prices. Their measure of liquidity is annual turnover, defined simply as the number of shares traded divided by the stock's outstanding shares. High-turnover stocks tend to have low bid-ask spreads, high trading volume relative to the size of the company, and low price impact per dollar traded. The study covered the top 3,500 U.S. stocks by capitalization and the period 1972 through 2010. They sorted stocks into liquidity quartiles and contrasted them with size or capitalization quartiles. The following is a summary of their findings:

They also found that the liquidity premium holds regardless of market capitalization (size). However, the liquidity effect is the strongest among micro-cap stocks and declines from micro- to small- to mid- to large-cap stocks:

The liquidity premium also holds across growth and value stocks:

From a long-only perspective (the way most mutual funds invest), the monthly premiums were a still substantial 0.20 percent using the three-factor model (t-stat 4.1), and 0.16 percent (t-stat 3.3) using the four-factor model.

The authors explain that the source of the higher returns comes not only from compensation for taking liquidity risk, but also from stocks "migrating" between liquid and less liquid (just as stocks migrate from small to large and value to growth, and vice versa). For example, they found that in the lowest liquidity quartile, only 74.9 percent remain a year later, with 25.1 percent moving to higher liquidity quartiles.

The authors found that the migration of liquidity is the primary driver of returns. They also saw no reason to believe that either of the two sources of extra return for illiquid stocks should be expected to disappear: "Liquidity will continue to be valued high, and illiquid stocks will still come at a discount." Thus, liquidity as an investment style is likely to continue to outperform.