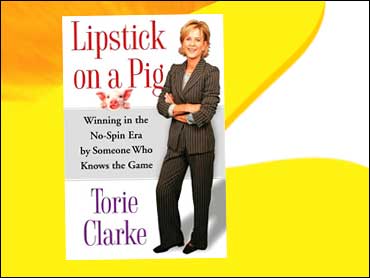 Those are the opening words in a new book, "Lipstick on a Pig," written by Washington insider Torie Clarke, who formerly worked as Assistant Secretary of Defense for Public Affairs.

As Clarke explained to The Early Show co-anchor Hannah Storm, she never had believed in an "era of spin." She added, "When you are talking about 24/7 news, information that moves around the world with incredible volume and velocity, it doesn't hold up."

Clarke worked with Sen. John McCain during his early years in the Senate, when McCain was among those involved in a scandal during the middle of the savings and loan crisis. Clarke said she learned a lot about how to control such incidents from the way he reacted to that situation.

What did McCain do?

"He didn't do what the other four senators did," recalled Clarke. "They pretty much went underground on the story and decided, 'If we don't talk about it and don't answer questions about it, maybe people won't notice it.'

"He (McCain) said, 'To heck with that. I'm going to lean into this and answer every question and do every interview and tell my side of the story again and again and again, because I believe the more people see and hear, the more they'll recognize I didn't really do anything that terrible.'

"He was right," concluded Clarke. "The allegations unanswered are sometimes challenges accepted. … Confess your mistakes — and do it early and do it often."

Clarke also said that if you don't say "I was wrong" six times a year, you aren't really being honest.

Storm brought up Secretary of Defense Donald Rumsfeld, Clarke's former boss at the Pentagon, as someone who a lot of people say, never admits he's wrong.

Clarke disagreed strongly. "He absolutely does. Anybody who spends a lot of time with him, or the reporters that cover him all the time at the Pentagon, will tell you the same thing."

So why does Rumsfeld have that reputation?

"He has a reputation for being very tough," countered Clarke. "You want a tough secretary of defense. You don't want a wimp. You want someone that believes in important principles and follows through on them. But he always encouraged all of us, everyone who work for him and around him, to say, 'If I make a mistake, let me know and let's clear it up.'"

Storm challenged Clarke to name a mistake to which Rumsfeld has admitted regarding Iraq.

"Colossal intelligence mistakes shared with the Russians, Germans, U.N.," replied Clarke. "Something we should all be worried about, that we all believed one thing and it turned out not to be true."

Storm said, "Because the war was sold on the premise that Saddam Hussein had weapons of mass destruction, some Americans say this was spun into a war on terrorism."

Replied Clarke: "I disagree. There was a war on terrorism, a very, very real thing. I consider Iraq one front in that war on terror. So it wasn't spun in one direction or another. There were colossal intelligence mistakes at the beginning. That is tragic. We should all be working hard to fix that.

"But we also oughts be focused on the fact there is unconventional threats out there and we have to deal with them."

"As many as 60 percent of Americans don't approve of the way the president is handling the war," Storm said. "That's a pretty big number. This White House is on message. We heard the same message today as we did six years ago." Would Clarke, from a public relations standpoint, change that in any way?

"You say 'message.' I say 'principles,'" Clarke replied. "They've been very consistent about the principles, about the ideology and what they are trying to accomplish, which is important. You want to be communicating mission and intent, as they say in the military.

"What I think they've done the last five or six months ... is get much more active and much more engaged with the American people. These are tough issues — no two ways about it. You can't just give one speech and come back two months later and figure that people get it and they know what's going on."

Clarke helped institute the program in which reporters are embedded with military units in Iraq. Storm brought up the subject of ABC News anchorman Bob Woodruff and his cameraman, who were seriously injured while on the job.

In retrospect, does Clarke think embedding reporters is worth the risk?

"Absolutely," she replied. "First and foremost, I think the American people deserve to see what their military is doing, the good, the bad, the in-between. I really, really believe that.

"Secondly," she continued, "I know from personal experience that the more people see how the military is doing its job, the more support the military has. You have to have public support over the long haul for successful military operations. You just have to think about those reporters who are willing to put themselves at the pointy end of the spear and take those risks. They are doing an important job, and I hope and believe they'll continue to do it."