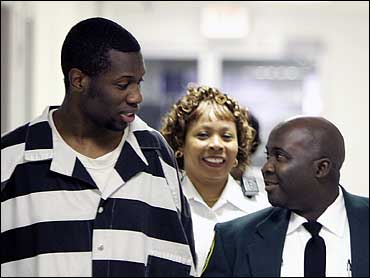 Lionel Tate, the teenager who got a second chance after he beat and stomped a 6-year-old girl to death, was sent back to prison for 30 years Thursday for gun possession.

"In plain English, Lionel Tate, you've run out of chances. You do not get any more," Circuit Judge Joel T. Lazarus told Tate, who smirked as he was led off to jail in shackles.

Tate, now 19, was convicted of beating Tiffany Eunick to death in 1999, when he was 12, claiming he accidentally killed the girl while imitating pro wrestling moves he had seen on television. He became the youngest person in modern U.S. history to receive a life sentence.

His murder conviction was overturned in 2004 by an appeals court that said it was not clear Tate understood the charges. He was freed under a deal in which he pleaded guilty to second-degree murder and was sentenced to 10 years' probation.

On Thursday, he was back in court over the holdup of a pizza deliveryman last May.

In a deal with prosecutors, Tate had faced 10 to 30 years in prison after pleading guilty to robbery and violating his probation by having a gun. On Thursday, the judge let him withdraw his guilty plea in the robbery but still sentenced him on the gun charge. The robbery trial is set for Sept. 18.

Defense attorney H. Dohn Williams said he did not understand why Tate would want to go to trial on the robbery charge, given that a conviction could bring a life sentence in addition to the 30 years for the probation violation.

"He continues to get bad advice from meddling third parties," Williams said outside court.

Williams said Tate's mother, Florida Highway Patrol trooper Kathleen Grossett-Tate, told him he could win an appeal on the probation violation conviction, win his robbery case and leave jail in a year. She left court without commenting.

Williams pleaded with the judge for leniency, blaming Tate's criminal behavior on his upbringing.

"The death of Tiffany Eunick would never have occurred if there had been proper parental guidance and control," Williams said. "Six-year-old Tiffany tragically died while ... roughhousing with a 6-year-old boy in a 12-year-old's body."

The judge said Tate has shown "disdain and disrespect" for the law after repeated opportunities to redeem himself.

Since his release in 1999, Tate has had numerous run-ins with the law. In 2004, the judge sentenced him to an additional five years' probation for having a knife.

Last month, the judge ruled for the second time that Tate was competent to face the robbery charge after Tate claimed he was mentally ill from years of abuse by his mother. He claimed he was hearing voices and contemplating suicide, a story he later admitted was a ruse.