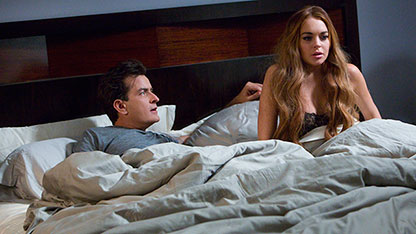 (The Insider)  Well, at least these two seem to have a sense of humor.

Often-troubled Charlie Sheen, 47, gets in bed with often-troubled Lindsay Lohan, 26, in this just-released still from Scary Movie 5, coming to theaters in 2013.

...Seriously, is this not the scariest potential Hollywood hookup of all time?!