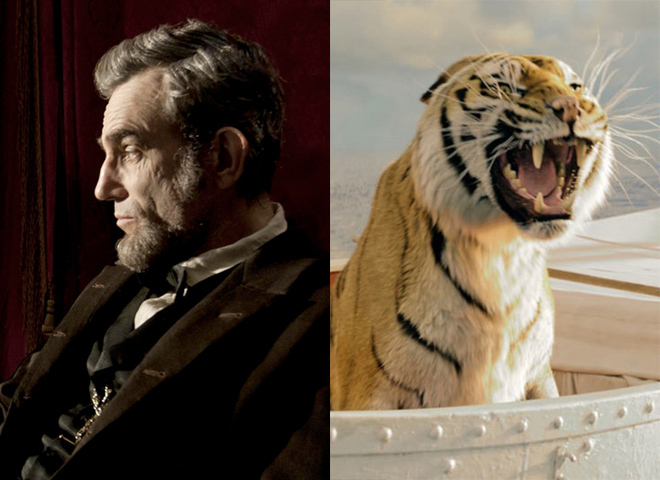 Close behind was fellow Best Picture nominee "Life of Pi," Ang Lee's mystical fable of a young man stranded on a ship's lifeboat with a voracious Bengal tiger, which received 11 nominations.

Joining them in the Best Picture category are: "Les Miserables," an adaptation of the stage musical of love and vengeance in France against a backdrop of revolution, which earned 8 nominations total; "Argo" (winner of seven nominations), in which a CIA operative tries to evacuate Americans trapped in Tehran during the 1979 hostage crisis by pretending to be a film crew, based on a true story; and "Zero Dark Thirty" (five nominations), an account of the hunt and ultimate killing of terror leader Osama bin Laden.

Also nominated: "Amour," Michael Haneke's intimate portrayal of an aged couple grappling with illness and the specter of loss, a top-prize winner at Cannes and the European Film Awards; "Beasts of the Southern Wild," a Sundance favorite that uses magical realism to evoke a child's world in the Louisiana bayou; "Django Unchained," Quentin Tarantino's violent tale of bounty hunters and slaveowners; and "Silver Linings Playbook," a comedy-drama of a man released from a mental institution, probably prematurely, which received eight nominations in all.

Recent changes in Oscar rules for Best Picture ballots - which use preferential voting to tally a particular film's support, with each Academy member listing a maximum of five choices - mean that the number of first-place votes a particular film garners determines how many nominees there will be, between five and a maximum of 10. This year's roster indicates that other prospective nominees "The Best Exotic Marigold Hotel," "The Dark Knight Rises," "The Master," "Moonrise Kingdom" and "Skyfall" failed to earn enough first-place ballots to qualify.

Spielberg (left) was nominated for his seventh Best Director Oscar (he has won the award twice, for "Schindler's List" and "Saving Private Ryan"). He was joined by Michael Haneke, "Amour"; Benh Zeitlin, "Beasts of the Southern Wild"; Ang Lee, "Life of Pi"; and David O. Russell, "Silver Linings Playbook."

Daniel Day-Lewis (an Oscar winner for "My Left Foot" and "There Will Be Blood") received his fifth Academy Award nomination for Best Actor as the president in "Lincoln." He is joined by Bradley Cooper as a bipolar man trying to straighten out his life after a stint in a mental institution in "Silver Linings Playbook"; Hugh Jackman as ex-con Jean Valjean in "Les Miserables"; Joaquin Phoenix (previously nominated for "Gladiator" and "Walk the Line") as a WWII veteran who becomes the fiercest defender of a cult in "The Master"; and Denzel Washington (an Oscar-winner for "Glory" and "Training Day") as a pilot battling both an NTSB probe into a fatal plane crash and his own alcoholism in "Flight."

Among Best Actress nominees are Jessica Chastain as a CIA analyst instrumental in the hunt for Osama bin Laden in "Zero Dark Thirty"; Jennifer Lawrence as a young widow who acts as a go-between for her bipolar friend and his estranged wife in "Silver Linings Playbook"; Emmanuelle Riva as an octogenarian stroke victim who is the center of her husband's universe in "Amour"; Quvenzhane Wallis as an imaginative and self-reliant child in "Beasts of the Southern Wild"; and Naomi Watts as a wife and mother whose family is shattered by a natural disaster in "The Impossible";

Wallis, who was just 5 when she first auditioned for the role in "Beasts" and who turned 9 after the movie opened, becomes the youngest female ever nominated in an acting category. [The two previous youngest child nominees ever were Justin Henry (a Best Supporting actor node for "Kramer vs. Kramer" at age 8 years, 9 months), and Jackie Cooper (as Best Actor for "Skippy" at age 9 years).]

The Best Supporting Actor category features a lineup of veteran Academy Award winners: Alan Arkin (an Oscar-winner for "Little Miss Sunshine") as the Hollywood producer of a fake movie serving as a CIA cover in "Argo"; two-time Oscar-winner Robert De Niro (for "The Godfather Part II" and "Raging Bull") as the father of a mentally unstable young man in "Silver Linings Playbook"; Philip Seymour Hoffman (a Best Actor Oscar-winner for "Capote") as the charismatic leader of a cult in "The Master"; Tommy Lee Jones (an Oscar-winner for "The Fugitive") as abolitionist Congressman Thaddeus Stevens in "Lincoln"; and Christoph Waltz (an Oscar-winner for "Inglourious Basterds") as a bounty hunter in "Django Unchained."

Two-time Oscar-winner Sally Field (for "Norma Rae" and "Places in the Heart") joins her "Lincoln" co-star Day-Lewis as a Best Supporting Actress nominee, for playing first lady Mary Todd Lincoln. Also nominated: Amy Adams as the wife of a cult leader - with a powerful will of her own - in "The Master"; Anne Hathaway as the tragic factory worker Fantine in the musical "Les Miserables"; Helen Hunt (an Oscar-winner for "As Good As It Gets") as a sex surrogate in "The Sessions"; and Jacki Weaver as the mother of a mentally unstable son in "Silver Linings Playbook."

Sally Field: How her pluck won her role in "Lincoln"
Watch: Hathaway, Jackman on "Les Miserables"

Tarantino, a past winner for "Pulp Fiction," was nominated for Best Original Screenplay for "Django Unchained." Wes Anderson & Roman Coppola were also nominated for "Moonrise Kingdom," a picaresque story of puppy-love in which two kids escape for an idyllic sojourn on an island off the New England coast.

"Amour" (Austria), Michael Haneke's intimate portrayal of an aged couple grappling with illness and the specter of loss, leads the Best Foreign Language film category. (It is also the first foreign language film since 2006's "Letters From Iwo Jima" to be nominated for Best Picture.)

Last year only two songs qualified for an Oscar nomination (with the award going to a ditty about Muppets). With a rewrite of rules, five nominees were announced today, which promises no shortage of decibels in an Oscar show songfest featuring Adele ("the "Skyfall" theme), Hugh Jackman ("Suddenly," a song added to "Les Miserables"), and a talking stuffed bear ("Everybody Needs A Best Friend," from "Ted"). Also nominated: "Before My Time," from "Chasing Ice"; and "Pi's Lullaby," from "Life of Pi."

Composer John Williams broke his own record for most Oscar nominations (among living recipients) by earning his 48th, for the score of "Lincoln." He is joined among Best Original Score nominees by "Skyfall's" Thomas Newman (his 11th nomination, with no wins), Dario Marianelli ("Anna Karenina"), Alexandre Desplat ("Argo"), and Mychael Danna ("Life of Pi").

Nominees for Best Animated Feature include "Frankenweenie," Tim Burton's 3-D stop-motion animated tale of a young boy who - inspired by the legendary Dr. Frankenstein - brings his dead dog back to life. (The feature is a remake of Burton's 1984 short produced for Walt Disney, which the studio shelved.)

Also: "Brave," Pixar's tale of a Scottish princess trying to undo a witch's curse upon her clan; "ParaNorman," A 3-D stop-motion animation comedy from the creators of "Coraline," about a young boy who talks to the dead; "The Pirates! Band of Misfits," in which Pirate Captain is out to win Pirate of the Year Award in this comedy from Aardman, creators of Wallace & Gromit; and "Wreck-It Ralph," Disney's critically-praised homage to 1980s video arcade games.

Nominated for Best Documentary Feature are: "5 Broken Cameras," covering the conflict of Palestinian villagers demonstrating against construction of a barrier through disputed land; "The Gatekeepers," in which six former heads of Israel's domestic secret service agency discuss Israeli security from the Six Day War to the present day; "How to Survive a Plague," David France's documentary about the advocacy group ACT UP and its campaign to fight apathy in the face of the AIDS crisis; "The Invisible War," Kirby Dick's investigation of rape in the military; and "Searching for Sugar Man," about a poor musician in Detroit who had no idea he was a music legend in Africa.

Cinematographer Roger Deakins, who has been nominated nine times previously without a win, is hoping number 10 is the charm, with his lensing of the James Bond thriller "Skyfall." He is up against the imagery of "Anna Karenina," "Django Unchained," the 3-D "Life of Pi" and "Lincoln."

Two Snow White films - "Mirror Mirror" and "Snow White and the Huntsman" - are competing in the Best Costume Design category, against the period dramas "Anna Karenina," "Les Miserables" and "Lincoln."

The production design branch is honoring both flights of fantasy ("The Hobbit," "Life of Pi") and recreations of history ("Lincoln," "Les Miserables"), with the highly theatrical "Anna Karenina" bordering both.

The category of visual effects is a competition of science fiction and fable, with nominees "The Hobbit: An Unexpected Journey," "Life of Pi," "Marvel's The Avengers," "Prometheus" and "Snow White and the Huntsman."

"The Hobbit" is also competing for Best Makeup and Hairstyling against the jowls of "Hitchcock" and the tortured suffering of "Les Miserables."

And film editor William Goldenberg is competing against himself, for co-editing "Zero Dark Thirty" and his solo work on "Argo."

In addition to Bigelow's and Hooper's absence from the Best Director lineup, there were other notable omissions from this year's nominees' list.

Ben Affleck, a Directors Guild nominee for helming "Argo," was shut out from both directing and acting categories (although as co-producer he is up for a Best Picture win). Paul Thomas Anderson directed Phoenix, Hoffman and Adams to acting nominations, but received none himself for either directing or writing "The Master."

Other actors who didn't work their way into the final five: Richard Gere in "Arbitrage," John Hawkes in "The Sessions," Denis Lavant in the French critical favorite "Holy Motors," and Bill Murray as President Franklin D. Roosevelt in "Hyde Park on Hudson." The Best Actress category is missing Marion Cotillard ("Rust and Bone"), Helen Mirren ("Hitchcock"), and Rachel Weisz ("The Deep Blue Sea).

The supporting categories were particularly tough this year, with John Goodman (who has yet to receive an Oscar nomination) a sizable omission - his competing turns as a Hollywood makeup artist in "Argo" and a gleeful provider of drugs and alcohol in "Flight" likely canceled each other out. Also excluded were Javier Bardem as the scheming Bond villain of "Skyfall"; Leonardo DiCaprio and Samuel L. Jackson in "Django Unchained"; Garrett Hedlund in "On the Road"; Dwight Henry in "Beasts of the Southern Wild"; Matthew McConaughey as a male stripper in "Magic Mike"; Ewan McGregor in "The Impossible"; and Ezra Miller in "Perks of Being a Wallflower."

Missing among the Best Supporting Actress list: Samantha Barks and Amanda Seyfried in "Les Miserables"; Doona Bae, whose standout performance among several roles in "Cloud Atlas" was as the clone Sonmi-451; Emily Blunt in "Looper"; Judi Dench (both "Skyfall" and "The Best Exotic Marigold Hotel"); Rosemarie DeWitt in "Promised Land"; Ann Dowd in "Compliance"; Nicole Kidman as a sexually provocative woman trying to win the release of a convicted killer in "The Paperboy"; and Kelly Reilly as an addict who tries to accompany Denzel Washington on a path to sobriety in "Flight."

And among the films which - to paraphrase Sally Field, the Academy does not like, it really, really doesn't like - are "The Dark Knight Rises," "Cloud Atlas," "The Hunger Games," "The Perks of Being a Wallflower," "End of Watch," "Rise of the Guardians," "Looper," "Bernie," "The Cabin in the Woods," "Salmon Fishing in the Yemen," "Quartet," "Seven Psychopaths," "This Is 40," "To Rome With Love," "Trouble With the Curve," and "The Twilight Saga: Breaking Dawn Part 2," which received a collective zero nominations among them.

Winners at the 85th Academy Awards will be presented on Sunday, February 24, 2013, at the Dolby Theatre at Hollywood & Highland Center in Los Angeles.