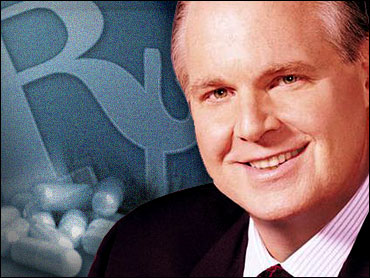 A bad 10 days for America's most-listened-to radio host got even worse Friday, when Rush Limbaugh announced on his show that he was addicted to painkillers and was admitting himself to a rehab center, reports CBS News Correspondent Jim Axelrod

"You know I have always tried to be honest with you and open about my life," Limbaugh said during a stunning admission aired nationwide. "So I need to tell you today that part of what you have heard and read is correct. I am addicted to prescription pain medication."

With an investigation by drug agents in Florida hanging over him, the conservative commentator said it was time to deal with it.

"Immediately following this broadcast I will check myself into a treatment center for the next 30 days to once and for all break the hold that this highly addictive medication has on me," Limbaugh said.

Not that a man with 20 million listeners a week is ever out of the public eye, but Limbaugh had been even more center stage than usual for the last few weeks.

He gave up his job as an ESPN sports analyst Oct. 1, three days after saying on the sports network's "Sunday NFL Countdown" that Philadelphia Eagles quarterback Donovan McNabb was overrated because the media wanted to see a black quarterback succeed.

The reports of possible drug abuse surfaced at about the same time, first in the National Enquirer. The tabloid had interviewed Wilma Cline, who said she became Limbaugh's drug connection after working as his maid. She said Limbaugh had abused OxyContin and other painkillers.

Law enforcement sources who spoke on condition of anonymity confirmed to The Associated Press that Limbaugh was being investigated by the Palm Beach County, Fla., state attorney's office.

"At the present time, the authorities are conducting an investigation, and I have been asked to limit my public comments until this investigation is complete," Limbaugh said.

Mike Edmondson, a spokesman for the Palm Beach County state attorney's office, said Friday his office could neither confirm nor deny that an investigation was under way. Limbaugh's attorney, Roy Black, did not return a message seeking comment.

What will all this mean for Limbaugh's future? Media columnist Michael Wolff says, "Those who hate him want to hang him right now. Those who love him, his audience, those 20 million, will give him every benefit of the doubt."

"Over the past several years I have tried to break my dependence on pain pills and, in fact, twice checked myself into medical facilities in an attempt to do so. I have recently agreed with my physician about the next steps."

Steve Plamann, executive editor of The National Enquirer, said he was gratified that Limbaugh confirmed the Enquirer story and that he plans to seek help.

"We didn't do our stories gleefully. We just reported the facts," Plamann said.

Premiere Radio Networks, which syndicates the politically focused "Rush Limbaugh Show" to more than 650 markets, did not have an immediate comment, said spokesman Michael Sitrick. Several guest hosts were scheduled until Limbaugh comes back after rehab.