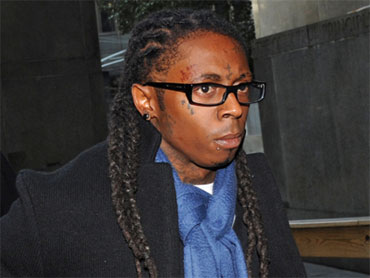 Lil' Wayne heads to jail in February in his New York gun case, just days after his next album comes out.

The rap star's sentencing date is Feb. 9, set in a Manhattan state court Tuesday. The Grammy winner said nothing during his brief court appearance.

He pleaded guilty in October to attempted criminal possession of a weapon. The charge stemmed from a 2007 traffic stop of his tour bus. His plea deal calls for a year in jail.

Cash Money Records co-founder Birdman announced on his Twitter account last week that Lil' Wayne's next album, "Rebirth," is due for release Feb. 1.