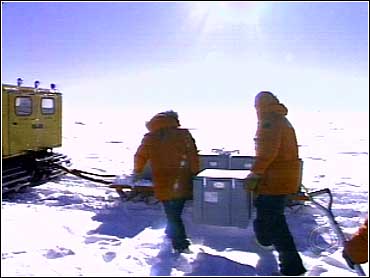 Wherever scientists have hunted for life on Earth, they've found it: in the blackness of the ocean depths, in rocks miles underground -- and now, even in the remotest, coldest place on the planet, Antarctica. As CBS News Correspondent Jerry Bowen reports, the discovery offers more hope that life could also exist off the planet.

For the past two Antarctic summers biologist Ed Carpenter has been searching for life at the bottom of the world.

"Initially, I was interested in finding a place on earth, at least in Antarctica, where there wasn't any life," he says.

But that's exactly what Carpenter and his small team of scientists found in the ice crystals at the South Pole: thousands of minute organisms, bacteria living and reproducing in the harshest of climates. It was a discovery with potentially enormous implications, Carpenter told CBS News during his 1999 field trip: "So if you could make it here, perhaps an organism could make it in a place like Mars, in a polar ice cap, for example."

Because of its many physical similarities to an earlier Mars, Antarctica has long been closely studied for clues to possible Martian life. Friday's news, coupled with the recent evidence of water on the red planet, only increases the odds, according to team member Doug Capone of the University of Southern California.

"It gives us at least optimism we might find other sites of life away from earth," he says.

The South Pole snow bacteria may have some practical benefit for man, if scientists can figure out what it is that keeps them from freezing.

"This could have implications for preservation of organs, human organs for transplant." says Carpenter.

But for now, the discovery alone is the pay-off: Bacteria at the bottom of the world. Imagine.