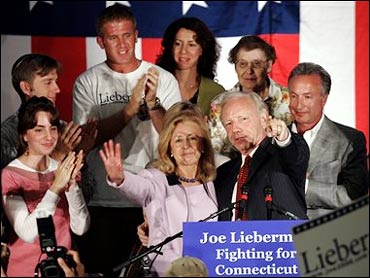 Stripped of support from the Democratic Party and working with a new campaign staff, Sen. Joe Lieberman kicked off his independent bid for re-election Thursday with a visit planned to this gritty city that last year re-elected a mayor who lost his party's primary.

Lieberman's late-morning visit to a Waterbury pizza joint — his first public appearance since losing Tuesday's primary and his first since dismissing his campaign staff — was to thank Waterbury for its fervent support during the primary. Lieberman won 60 percent of the vote here in his narrow loss to anti-war candidate Ned Lamont.

But it's also notable because Waterbury last year re-elected a mayor, Michael Jarjura, who lost his Democratic primary but won the general election in a write-in campaign.

"I think in a primary you are dealing with a very limited audience," Jarjura said. "Unfortunately, here in Connecticut, the Democratic Party has shifted, I think wrongly, too far to the left and that limited audience does not reflect the majority view of the people of the state of Connecticut. That was very evident in my election, and I think it will be extremely evident in Joe Lieberman's re-election in November."

Although top Senate Democrats, including John Kerry and Edward Kennedy of Massachusetts, Harry Reid of Nevada, Frank Lautenberg of New Jersey and Chuck Schumer of New York, are throwing their support to Lamont, Lieberman filed petitions Wednesday to mount an independent campaign.

"I've already spoken to Ned Lamont. I've already offered him financial help as well as any other help that he needs," Clinton said.

Even Lieberman's hometown newspaper, the New Haven Register, called for Lieberman to step aside, saying his campaign will divide the Democratic Party.

"The primary vote should have told Lieberman that he was out of touch with the state that he had taken too much for granted," read an editorial Thursday. "Until almost the closing days of the election, he seemed unable to gauge the deep anger of Democrats over the war in Iraq and his support for it."

"While very liberal Democrats have decided that they don't want Joe Lieberman in their party, America definitely needs men of Joe Lieberman's stature in the United States Senate," Kennedy said.

On Wednesday, Lieberman told The Associated Press that he was compelled to press his independent campaign.

"While I consider myself a devoted Democrat, I am even more devoted to my state and my country," Lieberman said in an interview with The Associated Press one day after his stunning loss. "I think it would be irresponsible and inconsistent with my principles if I were to just walk off the field."

"I do not blame my staff for my loss on Tuesday. I bear that responsibility," Lieberman said. "But now that we are entering a new and very different phase of the campaign, I wanted to bring in a new team."

Lieberman said he was not bothered by losing the support of his colleagues, noting he lost the primary even with their backing. "In the end, the people make up their own minds, and this is going to be a people's campaign," he said.

The defeat put Lieberman in the familiar role of a go-it-alone politician. He was the first prominent Democrat to openly criticize President Clinton's conduct with Monica Lewinsky. His support for the Iraq war and his defense of President Bush also have made him unpopular with members of his own party and gave Lamont a powerful platform on which to run.

Lieberman's 10,000-vote loss sets up a three-way race this fall among Lamont, Lieberman and Republican Alan Schlesinger, who has trailed far behind both Democrats in recent polls.

Though having both Lieberman and Lamont on the ballot could split the Democratic vote, Schlesinger is not considered a major threat. His campaign stumbled in July after revelations that he used a fake name to gamble at a Connecticut casino and had been sued over gambling debts at two New Jersey casinos.

Kenneth Dautrich, a public policy professor at the University of Connecticut, said that Lieberman's name recognition and moderate stances will draw strong support from independent and Republican voters in November.

Lamont's views that appeal to liberal Democrats will likely turn away many unaffiliated and Republican voters, Dautrich said.

"For a variety of reasons, I think Lieberman is now in the driver's seat," Dautrich said. "We probably would expect to see Lieberman with a fairly handy lead as the election campaign begins."

The biggest challenge, Dautrich said, will likely be fundraising. Lamont, a multimillionaire who put $4 million of his own money into the primary, will also get donations from traditional Democratic sources.

"The one handicap is he doesn't have the deep pockets that Lamont has," Dautrich said. "Lamont can put his hand in his pocket and come out with a few million bucks, and Lieberman can't do that."

One strategist, who spoke on condition of anonymity, said Lieberman had about $2 million remaining after the primary race against Lamont.

The primary was Lieberman's first loss in a Connecticut campaign since 1980, and he has long been one of Connecticut's most popular Democrats. He became just the fourth Senate incumbent since 1980 to lose a primary.

Lamont won by hammering away at Lieberman's support for the Iraq war and accusing him of being too close to President Bush, repeatedly noting an incident in which Bush appeared to plant a kiss on the senator's cheek after his 2005 State of the Union address.

Lamont's campaign also was embraced by liberal bloggers, who saw it as a chance to take down an incumbent and play a bigger role in the Democratic Party.

Republicans seized on the results to paint Democrats as careless with the country's security.

"It's an unfortunate development, I think, from the standpoint of the Democratic Party to see a man like Lieberman pushed aside because of his willingness to support an aggressive posture in terms of our national security strategy," Vice President Dick Cheney said from Jackson, Wyo.

White House spokesman Tony Snow called the primary "a defining moment for the Democratic Party, whose national leaders now have made it clear that if you disagree with the extreme left in their party they're going to come after you."

A Quinnipiac University poll released in July showed that 51 percent of likely voters would support Lieberman in a three-way race, versus 27 percent for Lamont and 9 percent for Schlesinger, a lawyer who was formerly a legislator and mayor. However, a CBS News/New York Times exit poll of nearly 2,700 voters on Tuesday found that 61 percent said Lieberman should not run as an independent.

Connecticut voters have previously embraced independent candidates. Former Gov. Lowell Weicker, a former Republican who lost his U.S. Senate seat to Lieberman in 1988, ran for governor as an independent in 1990 and won.