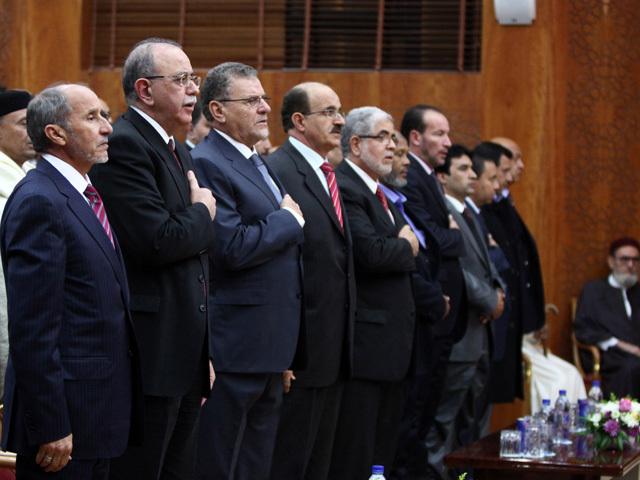 TRIPOLI, Libya - For the first time in more than four decades, Libyans on Saturday celebrated the 60th anniversary of the country's independence from Italy and France.

Under Muammar Qaddafi's 42-year rule, the celebration was scrapped and instead, only the 1969 date of his coup was marked.

"Today we begin the building of Libya as our forefathers have done," Prime Minister Abdurrahim el-Keib said during the celebration. "We call on our sons to build Libya after its destruction."

His remarks were part of an official ceremony in the capital Tripoli. Thousands of people flocked to the capital from around the country in hopes of breaking bread on an 7-mile-long (11-kilometer-long) set of tables planned along Tripoli's coast as part of the ceremony. However, the dinner was canceled due to security reasons and infighting among former rebel groups who were invited, officials said.

At the National Transitional Council's headquarters in Tripoli, ministers shared a cake and mingled with journalists.

No family members of deposed King Idris, who were forced into exile in 1969, were in Libya for the ceremony. Idris died in Cairo in 1983.

Libya was occupied for decades by various nations, and it was not until 1947 that both Italy and France relinquished claims to parts of the country. The United Libyan Kingdom was announced with U.N. backing in late 1951 under King Idris.

"As the late King Idris said at the time, preserving independence is harder than achieving it," NTC chairman Mustafa Abdul-Jalil said at the ceremony.

On the sidelines of the ceremony, the prime minister told reporters that the Economy Minister Taher Sharkas had resigned due to health reasons.

The resignation comes after protests demanding that officials of the former regime be barred from serving in government.

Sharkas had been appointed to the same post by Qaddafi just two months before the longtime leader's capture and killing in October, a few three days before rebel fighters took over the capital, Tripoli.

His resignation also followed a Thursday announcement by Abdul-Jalil, in which he laid out 18 new ethics and standards guidelines for ministers in the new Cabinet formed after Qaddafi's ouster. One of the new guidelines is that a minister cannot have served in a top post under Qaddafi.

Protesters in the eastern Libyan city of Benghazi, where the anti-Qaddafi uprising broke out in February, have been protesting for nearly two weeks, demanding transparency and justice from the country's new leaders. They also called for Sharkas' ouster after it was discovered that Qaddafi appointed him as a minister on Aug. 18.

The new government has said it is open to some reconciliation with former regime officials, but protesters are opposed.

According to an NTC official, who wished to remain anonymous because he was not authorized to disclose internal policy, the prime minister is the one who chose Sharkas for the post. The official said it was a "sloppy" mistake and that el-Keib had not done enough research on Sharkas' background.

In his remarks at the independence ceremony, Abdul-Jalil admitted that the NTC made mistakes during the transition.

"We are not going to defend these mistakes, but it is on us as a national duty and responsibility to be transparent and learn from them so we do not repeat them," he said.