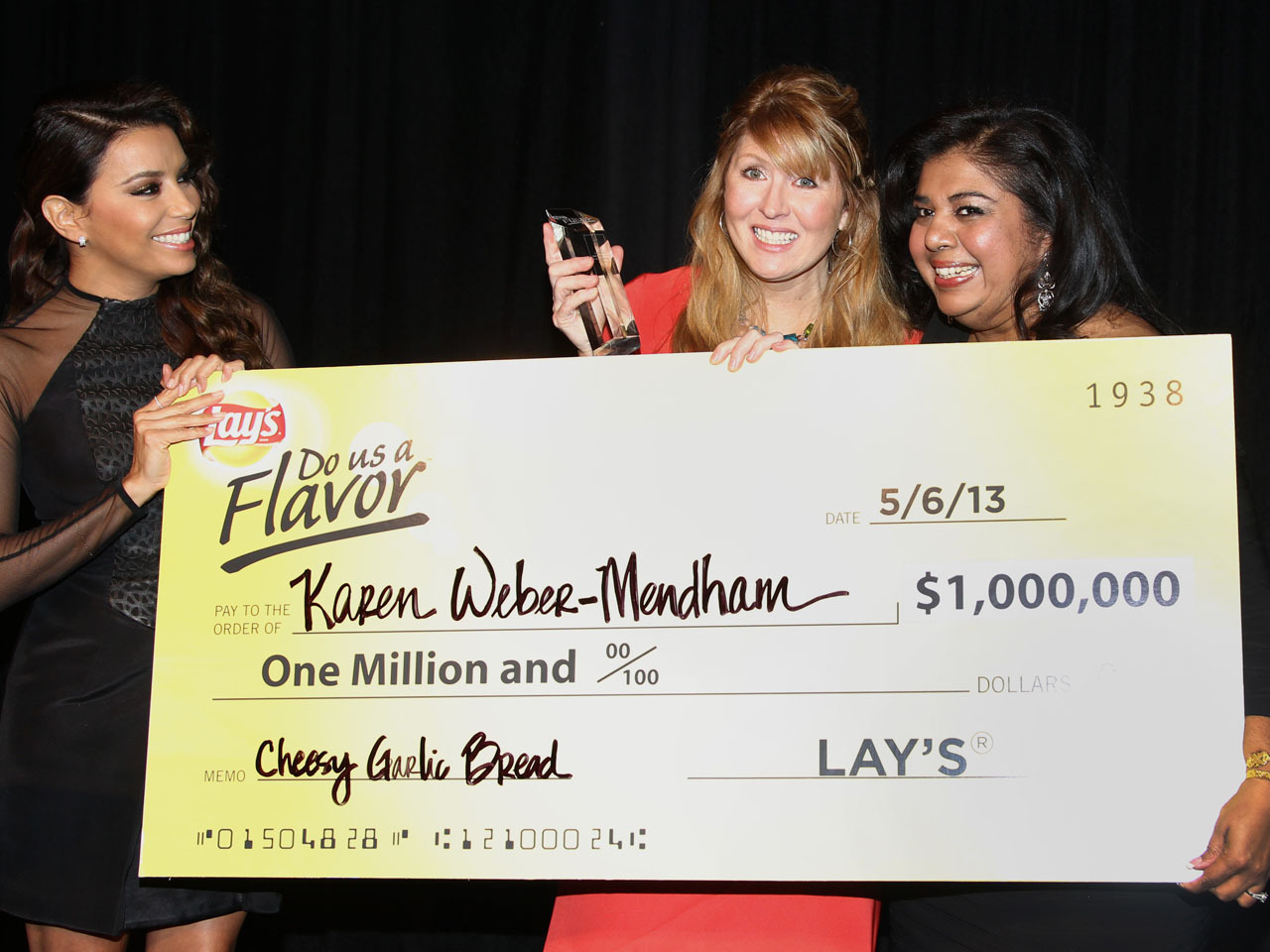 Fans voted to keep the potato chip maker's Cheesy Garlic Bread flavor on store shelves for at least the end of the year as part of the company's nearly year-long "Do Us a Flavor" promotion.

The campaign is the latest promotional stunt from companies trying to engage customers through social media and direct interaction. Toy maker Hasbro Inc. recently held a Monopoly contest that ended with the addition of a cat game token and the demise of the iron for the classic board game. Online retailer Amazon.com Inc. is asking people to watch show pilots on its streaming video service and vote for which one to turn into a full series.

Karen Weber-Mendham, a children's librarian from Land O'Lakes, Wis., submitted the Cheesy Garlic Bread flavor and will receive $1 million or 1 percent of sales, whichever is higher. (The company said it hasn't tallied sales numbers yet.) The creators of the Chicken & Waffles and Sriracha chips will be awarded $50,000 each.

Weber-Mendham came up with the flavor because her three kids love to order cheesy garlic bread at Italian restaurants. Earlier this year she traveled to Frito-Lay's Plano, Texas, headquarters to taste the chips. Frito-Lay is a unit of PepsiCo Inc.

"I was actually shocked at how good the chips came out," Weber-Mendham, 45, said in an interview after she was named the winner late Monday in Los Angeles.

Lay's kicked off its "Do us a Flavor" campaign last summer, calling for potato chip lovers to come up with creative flavors. A panel of chefs and flavor experts looked through about 3.8 million submissions and selected the three finalists earlier this year.

The flavors have been on store shelves since February. Customers were asked to taste them and vote for their favorite on Facebook and Twitter. Over a million votes were submitted, according to Lay's.

Cheesy Garlic Bread flavor is expected to stay in stores at least until the end of the year. If the flavor sells well, Lay's will continue selling it, said Ram Krishnan, Frito-Lay's vice president of marketing.

The Chicken & Waffle and Sriracha flavors will remain in stores for the summer, partly because they were so hard to find during the contest, Krishnan said.

Demand for the three finalist flavors was larger than the company expected. People turned to the Lay's Facebook page to say they couldn't find the flavors. Krishnan said that the company had to double its shipments to stores to meet demand.

Even Weber-Mendham couldn't find the chips. She frequently visited the three supermarkets with a camera in hand, hoping to find a bag. "They were always gone," she said.

Jeremy Troxell was able to find one bag of Lay's Cheesy Garlic Bread at a Wal-Mart in El Paso, Texas, where he lives. The 27-year-old Web designer looked in stores all over the city for more, and asked friends if they saw them.

Troxell doesn't even like to buy potato chips. He usually grabs healthier snacks, such as pita chips.

"I would have purchased the other ones if I found them," Troxell said. "They're flavors you never think of. It's kind of a novelty thing."