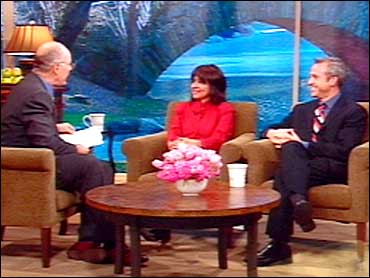 On Monday night, Monica Lewinsky began a new career as host of a seven-part "reality TV" series on Fox called "Mr. Personality." Linda Stasi of The New York Post and The Early Show's entertainment contributor Jess Cagle gave us their take on the show.

In "Mr. Personality," a female contestant is courted by masked males, whose looks are kept hidden from her but not the studio audience. The contestant has to choose one based entirely on personality. Lewinsky serves as the moderator and host.

In the ratings, "Mr. Personality" displayed a dominant personality with viewers for its premiere, according to Nielsen Media Research figures.

But the real question is how did Lewinsky do? Stasi said, "She was fine. But why wasn't she the one getting a date? She's the woman in America who needs a date most and she's hosting the show? No, let's get this woman a man."

"I wanted more of Monica, which I thought I'd never say," Cagle said, noting most of the first half of the show was quick cuts of Lewinsky reacting to the other contestants with no sound. "And I thought I would never say that. She just kind of stood around."

Stasi noted, "That's what always happens on those reality shows. They have this dorky host that just walks around and has nothing to do. And this time they put her in an evening gown."

Though Lewinsky is still making money from her memoirs of the Clinton saga, and from her line of handbags on sale on the Internet, Stasi said, "Those are all her own things. It's not like somebody, you know, gave her a job."

Cagle noted she did work for Jenny Craig, but that did not work out for her. Exagerating, Stasi said, "From the time she got the gig to the time she made her first appearance, she gained, like, 400 pounds, poor thing."

Both agreed it is hard not to associate her with her relationship with former President Clinton and his impeachment.

"Her life is ruined," Stasi said. "In the meantime, Bill Clinton goes around and he's partying, he's doing this, he's making gazillion dollars and her entire life is ruined for doing something that a lot of other women did."

"Let's be honest here. Everybody's acting like she's the only person who ever did this in the history of the world. No! I mean, she's walking around with his scarlet letter."

Cagle disagreed, "I don't think her life is ruined. She's got a hosting job on TV," he said noting he will tune in next week to see the show.

"Now that I've seen it, I kind of want to see how horrible these guys can get. But it's not for Monica, I want too see what morons these people are."

And so does Stasi, she said.