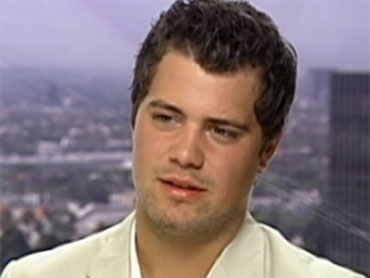 Levi Johnston has been tight-lipped since his second engagement to Bristol Palin ended roughly a month ago -- about a week after they announced they were getting married.

Johnston, the father of Sarah Palin's grandson, says he wishes he hadn't apologized for telling lies about the former Alaska governor because he's "never lied about anything."

In an exclusive interview with CBS News Correspondent Betty Nguyen on "The Early Show" Friday, Johnston, who has appeared nude on the cover of Playgirl, said, "I don't really regret anything. But the only thing I wish I wouldn't have done is put out that apology, 'cause it kind of makes me sound like a liar. And I've never lied about anything. So that's probably the only thing. The rest of the stuff I can live with."

The interview was taped Thursday in Los Angeles.

Johnston is the two-time ex-fiance of Bristol, Palin's eldest daughter, and the father of Bristol's son, Tripp. Bristol Palin's teen pregnancy thrusted the couple into the national spotlight during Sarah Palin's run as the GOP's vice presidential candidate in 2008.

Johnston has expressed an interest in politics, filing papers last week to run for office in his hometown of Wasilla, Alaska, next year.

While he hasn't officially declared which political office he aspires to, his manager, Tank Jones, has said Johnston is interested in a run for mayor or city council. Earlier this month, Jones confirmed the 20-year-old Johnston planned to run for office as part of a reality TV show.

Wasilla is where Palin got her political start, first as a council member and then as mayor.

Johnston said he hopes he could be a better mayor of Wasilla than Palin. "I can't guarantee or promise you anything but I'm gonna try. ..That's the goal," he said on the show.

He predicted he'd win, which would, he said, mean he's "going to have to give Hollywood up for three years."

"You've never run for a political office before," Nguyen pointed out. "You don't have a high school diploma. What are your qualifications to become mayor of Wasilla?"

"I really don't think it's (becoming mayor) about qualifications," Johnston responded. ... It's really about, you know, the people liking you and believing in you."

"But you make it sound like it's a popularity contest," Nguyen said. "Running for mayor, that office is a serious job."

"Oh, it's definitely serious, you know?" Johnston replied. ... Obviously, you want people's votes, and at the end of the day, it is kind of popularity."

Did the fact that Sarah Plain onoce held that office factor into his decision to run?

"I don't care what she did or where she was at. I'm doing it because I want to," Johnston insisted.

Asked why he and Bristol broke up a second time, Johnston answered, "It was just miserable for the both of us. … We were constantly fighting, just trying to make it work for Tripp. And it just wasn't the right thing to do."

Bristol is reportedly set to do "Dancing with the Stars."

"I recently heard that, yeah. Great. Go for it!" Johnston chuckled.

In an interview with People magazine, Bristol accused Johnston of ruining their relationship with his hunger for fame, saying he's obsessed with the limelight and, as Nguyen put it, "that she was played."

"I don't think I'm any more obsessed with making a career out of this than she is," Johnston countered. "Obviously, she's doing 'Dancing with the Stars." '

"You've posed for Playgirl, participated in a music video, and now (you're doing) a reality show," Nguyen noted. "ARE you obsessed with the limelight?"

"I wouldn't say I'm obsessed with it. I'm just taking the opportunities as they come."

For the past year-and-half, Johnston has been engaged in a very public spat with Sarah Palin, including a scathing interview published in Vanity Fair. Earlier this month, Johnston issued the apology, but now says it was half-hearted on his part.

In one part, Johnston said he hoped he could restore the Palin family's trust.

"That was," he told Nguyen, "something I did to make my fiancée happy. You know, she wanted it. So we wrote something down and we sent it out because that's what she wanted."

"Did she write it or did you write it?"

"I'm not gonna get into all that. But I'm just gonna say that, together, we put it out there."

Why would he say something if it wasn't true?

"Trust me, it's easier to make them (the Palins) happy. … If you gotta live with them, you gotta make them happy."

Johnston says he's done with marriage, at least for now, but still hopes to have more children in the future. In the meantime, he says he's working on earning his high school diploma, and getting a team in place to advise him on just what it takes to run a city, should he become Wasilla's next mayor.