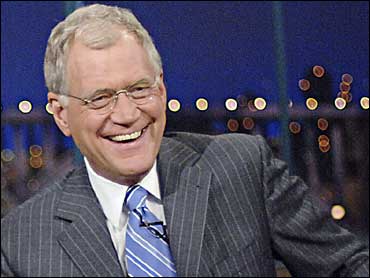 David Letterman, after a week off, dived right into material about Tiger Woods on the "Late Show" on Monday, joking that he wishes the golfer would stop calling him to ask for advice.

Even though the CBS late night host is only weeks removed from his own scandal, he kicked off his monologue with the subject of Woods, who has been hounded by claims from several women that they had affairs with him.

"Boy, it looks like that Tiger Woods is having some trouble, huh?" began Letterman, puffing his cheeks out.

He joked that if Woods' situation had happened three months ago, he'd "have material for a year." He still got plenty of mileage out of it Monday, on his first new show after a week of repeats.

"President Obama is sending troops to Afghanistan," Letterman said. "Hell, he ought to be sending them to Tiger Woods' house."

Woods, the world's No. 1 golfer, crashed his luxury SUV outside his Florida mansion on Thanksgiving weekend, and his wife told police she used a golf club to smash its back windows to help him out. The Florida Highway Patrol cited Woods for careless driving and fined him $164.

The accident and Woods' refusal to answer questions about it fueled speculation about a possible dispute between the golfer and his wife.

Just days before the crash, a National Enquirer story alleged Woods had been seeing a New York nightclub hostess, who denied it. After the crash, Us Weekly reported that a Los Angeles cocktail waitress claims she had an affair with Woods.

Last week, Woods issued a statement saying he had let his family down with unspecified "transgressions" that he regrets with "all of my heart."

In October, Letterman admitted to workplace affairs that police say led to a blackmail plot. CBS News producer Robert J. "Joe" Halderman has pleaded not guilty to trying to extort $2 million from Letterman to keep some of the comedian's sexual affairs quiet.

Letterman also presented a Top 10 list on how Woods might improve his image, with Tom Hanks making a cameo to react to each entry. No. 1 was "Blame Letterman."

Regular viewers of the "Late Show" might not be surprised Letterman would joke about Woods. He has frequently referred to his scandal since it erupted in October. Before that, he often joked about others caught in infidelities, including South Carolina Gov. Mark Sanford, former Florida Rep. Mark Foley and former New York Gov. Eliot Spitzer.