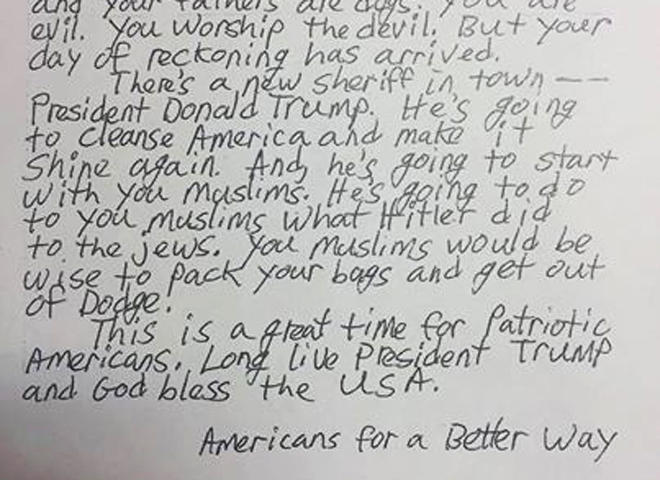 A mosque in Northern California received a letter in the mail saying President-elect Donald Trump is “going to cleanse America.”

Police in San Jose opened an investigation after authorities on Thursday night were told about the letter, which the imam at the Evergreen Islamic Center discovered in the mail. Sgt. Enrique Garcia, spokesman for the San Jose Police Department, said it’s being treated as a “hate motivated incident,” according to the San Francisco Chronicle.

The Council on American-Islamic Relations’ Bay Area chapter released a copy of the letter, which read:

To the children of Satan, You Muslims are a vile and filthy people. Your mothers are whores and your fathers are dogs. You are evil. You worship the devil. But your day of reckoning has arrived.

This is a great time for patriotic Americans. Love live President Trump and God bless the USA.

In response, the group called for increased police protection of local mosques.

“We urge local law enforcement authorities to work with Muslim community leaders to ensure the safety of all houses of worship,” Zahra Billoo, the executive director of the chapter, said in a statement on Saturday.

The chapter also called on California political and religious leaders to speak out against what it called “the mainstreaming of Islamophobia that we are witnessing in California and nationwide.” It said that since the presidential election on Nov. 8, the Council on American-Islamic Relations’ national office has noted an increase in incidents in which American Muslims and other minority groups are targeted.

The Southern Poverty Law Center reported that since Election Day, there have been more than 700 reports of hate crimes across the country -- vandalism, physical and verbal assaults, harassment and destruction of property -- directed against Muslims, African-Americans, Asians, immigrants, women and gays. In many cases the perpetrators allude to Mr. Trump, whose campaign was often criticized as playing to white nationalist prejudices. Critics charge that Mr. Trump’s campaign rhetoric, and subsequent election victory, has emboldened racists to speak up or act out, leading to nationwide demonstrations against racism and misogyny.

In an interview on CBS’ “60 Minutes” in the days following the election, Mr. Trump denounced the acts of violence and told people involved in such incidents to “stop it.”

Other hate-filled letters, as well as posters and leaflets promoting white supremacists and the KKK, have been reported around the U.S. One letter, left at several homes in McKinney, Texas, read in part, “Our new president Donald J Trump is God’s gift to white nation. We want to get our country back on the right track. We need to get rid of Muslims, Indians, Blacks and Jews.”

Hasan Z. Rahim, a spokesman for the Evergreen Islamic Center, told the San Jose Mercury News that, while the latest letter to the center was disturbing, he did not expect violence against the mosque.

“All of us are Americans,” Rahim told the paper. “We are as much a part of this land as anyone else. And we are confident that this being a country of law, no one really can take the law into their own hands and act on their own bigotry.”

Faisal Yazadi, who is president of the center’s board of directors, said there has been an outpouring of support from neighbors and from Police Chief Eddie Garcia, a Catholic bishop and the NAACP, the San Francisco Chronicle reported. The support made him feel unfazed, he said.

“Without their support I don’t think I’d be talking to you so strongly now,” he said.