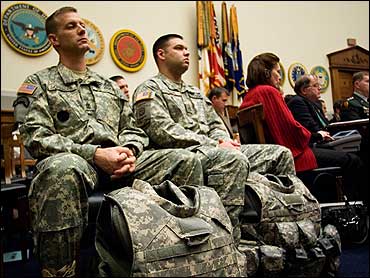 Using heavy layers of armor to keep troops safe from bullets and bombs is making the Marine Corps too slow on a battlefield where speed and mobility are critical, a senior military leader said Tuesday.

With 8,000 Marines about to be sent to Afghanistan to quell rising violence, Lt. Gen. George Flynn cautioned members of Congress against wrapping them in so much protective gear they cannot hunt down more agile insurgents who use the country's rugged peaks and valleys to their advantage.

"The bottom line is that the focus on armor as the principal means of protecting our force is making us too heavy," said Flynn, deputy commandant of the Marine Corps for combat development and integration, during a hearing held by the House Appropriations defense subcommittee.

The weight of personal body armor and steel-encased vehicles limits the speed and maneuverability that make the Marine Corps "more effective and deadly to the enemy," he said.

Body armor has been a proven lifesaver of U.S. troops. But the vests weigh as much as 34 pounds each. When body armor is added to the assault rifles, ammunition, water and other essential gear troops must carry, they can be lugging as much as 80 pounds into combat. Besides moving more slowly, overburdened troops tire more quickly and are prone to orthopedic injuries that can take them out of action, officials say.

Convincing a war-weary public of a less-is-more approach will not be easy, they say. If a commander should decide the gear should not be used for a particular mission and a service member is killed, there could be a backlash, said Jean Malone, deputy director of experiment plans at the Marine Corps Warfighting Lab in Quantico, Virginia.

"We've got to have the internal fortitude to come back and say: `We have the data. We made the right decision. We can't guarantee you that nobody will die in this war,"' he said.

Paring down the amount of armor could make troops safer on the battlefield, officials say. Speed and maneuverability give them the best chance of killing or capturing the Taliban and other militants before they can set roadside bombs or get in position for ambushes.

"Being able to maneuver and fight and chase down a fleeing enemy; that's actually where your protection is (versus) armoring up and being more static," said Brig. Gen. Tim Hanifen, deputy commanding general of the Marine Corps Combat Development Command at Quantico.

The loads carried by modern American troops are equivalent to those "the medieval knight wore into and out of battle back in the year 1000 until about the 16th century," he said.

Bomb-resistant vehicles that are light and nimble enough to handle Afghanistan's primitive roads are also needed, Flynn told the defense subcommittee. He outlined plans to buy an all-terrain vehicle strong enough to blunt improvised explosive devices and still have the mobility of a Humvee.

As troop levels surge in Afghanistan, so do roadside bomb attacks, according to the Pentagon's Joint Improvised Explosive Device Defeat Organization.

Body armor has become a focus of Marine Corps efforts to lighten troop loads because it weighs so much more than the other gear. The standard kit consists of hardened composite plates inserted into a ballistic vest. The vest and plates protect the upper body from armor-piercing bullets and shrapnel.

Personal armor made of substantially lighter composite materials that are more effective than current models will not be available for several years. So the Marine Corps is looking for near-term solutions.

The Marine Corps is buying 65,000 vests called "scalable plate carriers" that weigh under 20 pounds. The carrier, which uses the same plates as the standard vest, does not cover as much of the torso. About 14,000 of the plate carriers have been fielded and the feedback has been positive, according to Marine Corps officials.