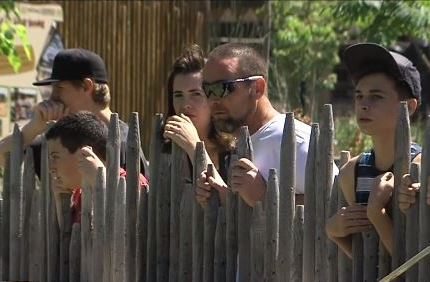 The 4-year-old female leopard was found by zoo visitors about one hour later sleeping on a high outdoor ledge in a public area about one or two feet from its exhibit, said Hogle Zoo spokeswoman Erica Hansen. No visitors were injured. The rare Amur leopard, named Zeya, was tranquilized, Hansen said.

The leopard is safe, said Nancy Carpenter, associate director of animal health at the zoo. The animal fell about three feet after getting tranquilized, and landed in a padded garden area.

Hansen said they don't yet know how the leopard escaped. It was put into a crate and transported to a holding area.

Reporter for CBS affiliate KUTV, Chris Jones, was visiting the zoo with his wife and young son when they were corralled into a bathroom around 9:30 a.m., said visitors were not permitted outside while zoo officials tracked the Amur leopard. School is out for summer and the zoo is in peak visiting season.

"It was relatively sparsely populated, but there were a good amount of people there," said Jones on the phone with KUTV.

The reports of a wild animal on the loose caused quite a commotion on social media, but zoo visitors who were inside said the situation played out calmly and orderly.

Stephanie Gardner said she was looking at the giraffes at the zoo when a staff member told her and her family to take shelter in the gift shop with about 40 other people because of a situation. She said there was "no chaos or anything."

Steve Jones said he and his family were at the monkey exhibit when zoo staff told them to get inside the bistro. They waited inside with several hundred people. Kids were playing, he said.

"We never really did feel in danger," Jones said.

The leopard was reported missing at 9:30 a.m. It was captured about an hour later, Hansen said. There are two Amur leopards at the zoo.

Hansen said it is rare for animals to get loose at the zoo. She said there was an incident a few years back when a wolf got out of its enclosure on Mother's Day.

The lines outside the zoo were very long with people who weren't able to get in because of the lockdown.

The U.S. Department of Agriculture last inspected the zoo on May 3 and found no violations.