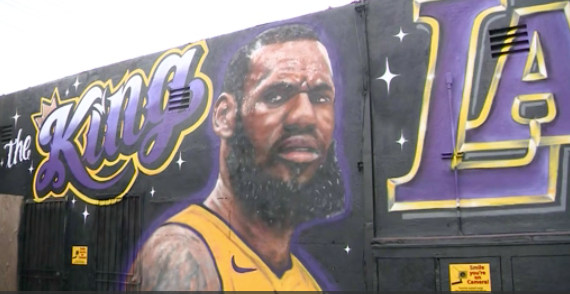 A mural showing new Los Angeles Laker LeBron James was vandalized soon after it was finished on Friday before being quickly restored. James announced last week that he was leaving his hometown Cleveland Cavaliers to sign a four-year, $154 million contract to don the Lakers' gold and purple jersey next season.

The original artwork outside a restaurant in Venice, California, depicted James in a Lakers uniform with "The King of LA" painted above him. But vandals wasted no time in making the latest member of LA royalty feel unwelcome.

Phrases such as "LeFraud,""We don't want you" and "No King" were spray-painted on the mural. The numbers "3-6" also appeared, a reference to James' career record in the NBA Finals.

Rob Aguirre, the general manager of the restaurant Baby Blues, says his security cameras caught at least one person spraying the paint.

"I mean, everybody's entitled to their opinion, it was just a piece of art," Aguirre told CBS Los Angeles. "All it was meant to do was welcome LeBron, try to capture some of the excitement that was going on in the city."

While its unclear who vandalized the mural, a Twitter user who went by the handle @BenOsaze and the name "Lakers Fanbase" put out a $300 reward to whoever "destroys" the mural on Friday. The user's account has either been suspended or deleted.

One of the artists that created the work, who goes by the moniker "Jonah Never," tweeted a photo of the updated mural, saying he took off "the little scribbles and the offending 'of.'"

The artist posted a photo of some of his other work, including a mural of Kobe Bryant, and defended his work to the LeBron haters. Never is a well-respected artist whose recent works have included the late Anthony Bourdain and Chester Bennington.