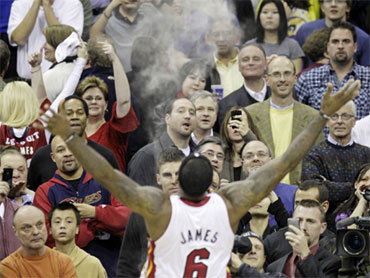 Boos and obscenities rained down on LeBron James in the arena that was once his home. He didn't seem to mind. By halftime, James was the one having fun.

Returning as a villain to his home state and the city he scorned this summer, King James was greeted with deafening boos, vulgar chants and some unprintable words from Cleveland fans who waited five months for him Thursday night as the Miami Heat played the Cavaliers.

With security guards forming a human barricade to line his entrance, James came hopping out of the tunnel and into the electrically charged atmosphere inside Quicken Loans Arena, as more than 20,000 fans, the same ones who adored him, turned hostile toward the two-time NBA MVP.

It was rowdy, but thankfully, not violent. Just in case, Moondog, the Cavs' fuzzy mascot, wore a bulletproof vest.

Booed every time he touched the ball, James scored 14 points in the first half as the Heat opened a 59-40 lead, and threatened to turn the highly anticipated game into a blowout.

"It's all right," James said of the jeers. "I understand how passionate these fans are. I've got a lot of love for these fans, but I'm a Miami Heat player now looking to get this win."

Las Vegas placed odds on whether James would perform his pregame powder toss ritual at the scorer's table. He went through with it, leaving a cloud of dust above his head — a gesture fans here used to embrace but can't stomach any longer.

Security was super tight. One fan was immediately ejected after he pointed at James and screamed in the superstar's face. The Cavaliers promised to safeguard James, who scorned them this summer when he decided to leave as a free agent and join Dwyane Wade and Chris Bosh in Miami.

As the Akron native took pregame layups, Cleveland fans vented, some holding up signs that read "Akron Hates You Too," "Merry Quitness," "The Decision: Stay or Betray" and "Remember Game 5," a reference to his final home game with the Cavs, a lopsided loss to the Boston Celtics in last season's Eastern Conference semifinals.

James was the first player introduced and as he lined up for the national anthem, Cavs owner Dan Gilbert was shown on the arena's giant scoreboard, drawing a raucous ovation. In the hours after James' infamous announcement on a one-hour TV special dubbed "The Decision," Gilbert ripped him in an open letter to Cavs fans and later accused the 25-year-old of quitting during the playoffs the past two seasons.

James looked up and noticed the ovation was for Gilbert. He shook his head, tapped his feet and turned to his new teammates, pumping his fist as he told them something.

One of the TV cameras remained fixed on Gilbert, a "Dan Cam" hoping to catch the owner in an animated moment.

James made his first trip to the foul line with 3:35 left in the first quarter. It used to be a time when he would be serenaded with the requisite "M-V-P" song, but this time it was different as the crowd broke into a chant of "Akron Hates You!"

After making his first shot, James chuckled and smiled broadly as fans continued to try and rattle him.

Before tip-off, James was segregated from his Heat teammates in a locker room he had only used as a high schooler. Two security officers and a media relations member kept reporters at bay as James dressed. Bouncing his head to the beat, James rapped along with music on his portable stereo before putting on his headphones. He briefly closed his eyes, and folded his hands as if in prayer.

Across the room, Zydrunas Ilgauskas, who followed James to Miami, held court with reporters interested in hearing about his return. The beloved big man known simply as "Z," Ilgauskas, the Cavs' career leader in rebounds and games played, was wrestling with his own emotions.

At 5:33 p.m., and five months after he famously announced on a self-promoting, made-for-TV special quickly panned that he was leaving the Cavaliers after seven seasons for Miami, James stepped back inside the building where he had his greatest triumphs for the first time as the enemy.

While it was freezing outside, the forecast inside was for a storm of boos.

After having his bags examined at security checkpoint he passed through hundred of times, James, wearing oversized glasses, a black stocking cap and leather jacket with the phrase: "Time To Roll" across the back, didn't say a word as he walked toward Miami's locker room — a place he had never been before.

James saluted an arena security guard before ducking inside and preparing for what was expected to be a hostile homecoming for the Akron native.

In the hours leading up to tip-off, everyone offered an opinion on what James was about to experience. Even the nation's highest-rated basketball player got involved. President Barack Obama added to the drama with a short, simple, and not-so-sweet description:

That, from a guy who had just gotten 12 stitches removed after getting his lip split open in a rough pickup game.

This was the night that Cleveland — and it seems the rest of the basketball universe — had been waiting for. This was the moment Cavaliers fans had dreamed of, their chance to put James in his place after he had embarrassed them on national television.

The day began with Cavs guard Mo Williams taking a subtle swipe at his former friend and ex-teammate. An avid Atlanta Braves supporter, he sported a Boston Red Sox jacket following the team's morning shootaround, maybe an early indication of what James, a die-hard New York Yankees fan, would expect for his first game in Cleveland as a visitor.

"It's almost like your ex-girlfriend coming to your wedding," Williams said.

The Heat kept to themselves during the day, staying back at their hotel. But following a walkthrough with his teammates, James delayed his traditional game-day nap to meet with one of his business partners in the lounge of the Ritz-Carlton.

Once the meeting ended, James headed for the elevator and was asked if he was ready for whatever Cleveland's fans were about to unleash.