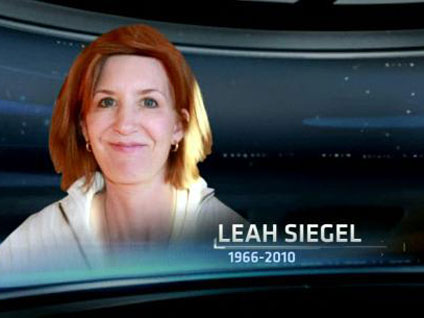 Her husband, Eric Loehr, wrote on her blog that she passed away at about 4:30 a.m.

"Thank you to everyone," he wrote Monday. "The support over the last couple of years has been amazing. As Leah has enriched many people's lives, I believe that her life was equally enriched."

According to the Dallas Morning News, Siegel, a mother of three, was one of the first women to become a full-time producer for ESPN. Her work earned her three Emmy awards.

She was diagnosed with stage 4 breast cancer in August 2008, shortly after the birth of her third child, Oliver.

Two services are being planned by her family, according to the blog - a traditional service on Friday, and a more light-hearted celebration of her memory in September.

ESPN dedicated Monday's Sportscenter broadcast to her. Watch the video: