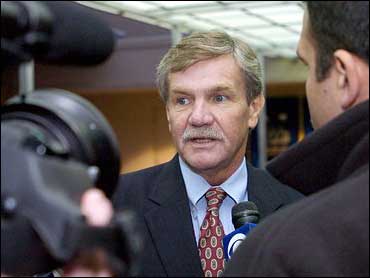 A federal judge threw out a filmmaker's defamation suit against Sen. John Kerry, saying remarks linked to Kerry's campaign during the heat of the 2004 presidential race amount to political opinions.

The filmmaker, Carlton Sherwood, sued Kerry and campaign aide John Podesta, who ran his campaign in Pennsylvania. Sherwood accused them of blocking the release of his documentary about Kerry's anti-Vietnam War activities by labeling Sherwood a "disgraced journalist" and a "Bush hack."

The Sinclair Broadcast Group Inc. canceled plans to air the 42-minute film "Stolen Honor: Wounds That Never Heal" on its stations before the November 2004 election.

Senior U.S. District Judge John P. Fullam said he found no evidence that Kerry personally made any of the statements, and furthermore judged them protected opinions.

"I do not believe any of these statements are actionable since they constitute expressions of opinion, and must be viewed in the context of a hard-fought political campaign," Fullam wrote in a ruling issued Thursday. "More importantly, I am not aware of any basis for holding a political candidate personally responsible for statements made in press releases issued by his party's national committee."

Kerry, a Massachusetts Democrat, created a fund earlier this year to pay to defend himself against Sherwood's suit.

"The courts will not be hijacked by Mr. Sherwood's personal agenda," Kerry spokesman David Wade said Friday. "John Kerry will continue to speak out about the best direction for our country and the real interests of Americas' men and women in uniform."

Sherwood, who once worked for former Gov. Tom Ridge, did not immediately return a message left Friday at his home near Harrisburg. His lawyer, Howard Scher of Philadelphia, said no decision has been made about whether to appeal.

The judge said that Sherwood's suit focused more on decades-old anti-war activities than it did on the alleged defamation, and noted its self-congratulatory tone in referring to Sherwood "at length, as an award-winning journalist of great integrity and renown."

Several Vietnam War veterans sued Sherwood over their portrayal in the documentary, but later dropped their lawsuits. At least one said he did so only because the depositions were forcing friends and fellow veterans to relive painful Vietnam War-era memories.

In asking Fullam to dismiss the suit, Kerry's lawyers earlier this year argued, "Presidential campaigns are not for the faint of heart."