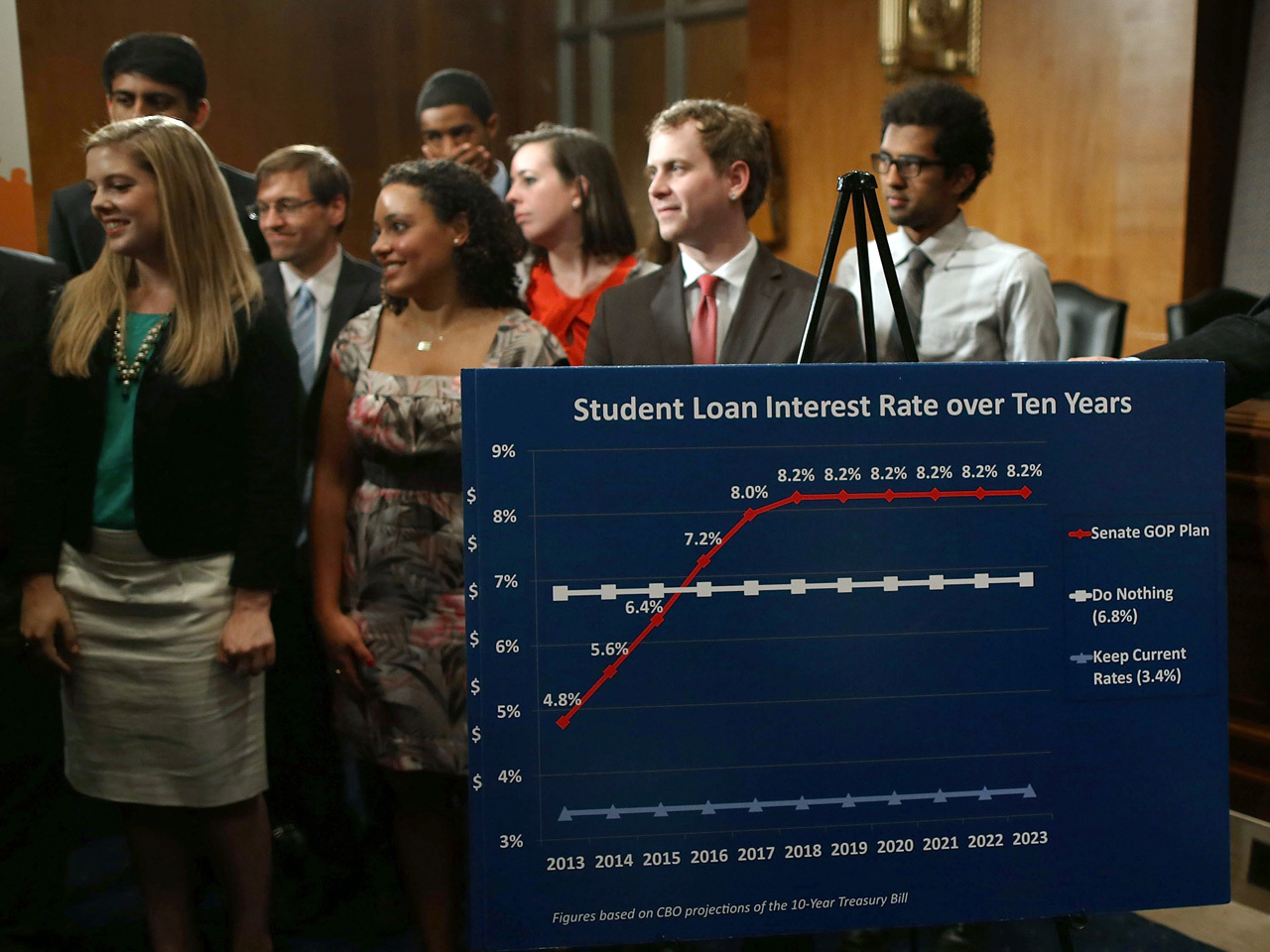 WASHINGTON A handful of senators struggled Thursday to hold together a bipartisan deal to keep student loan rates from doubling on July 1 while their colleagues traded political barbs with little more than a week to go before the deadline. Top White House officials, meanwhile, told lawmakers they were open to changes in President Barack Obama's student loan proposal if a compromise could be reached that would win congressional approval.

The behind-the-scenes negotiations were an attempt to head off a rate hike that Congress' Joint Economic Committee estimated would cost the average student borrower an extra $2,600. Both parties rushed to microphones to point fingers at the other for the potential hike but kept in touch with back-channel efforts that would prevent them from being blamed for adding to already high college costs.

"There's no question there are discussions going on in the Senate right now, bipartisan discussions. Whether it bears fruit in the next 10 days is going to be a nail biter," said Rep. Joe Courtney, D-Conn. The bipartisan deal, which would link undergraduate student loans' interest rates to the financial markets, would save the government more than $8 billion over the next 10 years, according to an unpublished Congressional Budget Office report. Democratic and Republican Senate aides insisted on anonymity in discussing the budget office report because it has not been released to the public yet and they were not authorized to discuss it publicly.

The compromise plan was similar to one Obama included in his budget and House Republicans passed. That put pressure on the Senate, where a competing partisan proposal came up short last week. The new bipartisan proposal's $8 billion sum was unlikely to win much support from Democrats, who insist that student loans should not be a source of profit for the government. Students loans issued this year were set to bring in a $51 billion net gain over the next decade.

The projections, though, could win votes from Republicans who do not want the popular student loan programs to add to the deficit. The lawmakers who helped craft the deal -- Democratic Sen. Joe Manchin of West Virginia, Republican Sen. Tom Coburn of Oklahoma and independent Sen. Angus King of Maine -- have not publicly announced the proposal. The Associated Press obtained a copy of the plan, and officials stressed that work on it was still under way. Senate aides involved in the bipartisan negotiations suggested the plan could be revised to make student loans less profitable but still not add to the deficit.

For instance, the White House had intended for its student loan proposal to neither raise money for the government nor cost taxpayers more. Democrats worried the White House proposal would, in fact, generate profit. Also, the president's plan did not cap interest rates, which Democrats preferred.

With little more than a week before the deadline, lawmakers ratcheted up pressure on Obama to negotiate a deal before he leaves next week for Africa.

"Listen, the president's failed to talk about this issue, and he hasn't lifted a finger to push his own party to pass his own proposal," Republican House Speaker John Boehner told reporters at the Capitol. "The time for games is up. I think our kids deserve better. The president and Senate Democrats need to get their act together so that we can prevent these interest rates from doubling on July 1."

Democrats, meanwhile, kept pushing a plan that would extend interest rates on subsidized Stafford loans at 3.4 percent for a further two years. It has failed to get the needed votes to clear a procedural threshold in the Democratic-led Senate or make its way out of the education committee in the Republican-led House. "If we can't get a long-term solution, we should get a deal that prevents rates from doubling," said Rep. Karen Bass, D-Calif., continuing her push for that proposal. Among some Democrats, Obama's proposal remained no more popular than when he included it in his budget.

"His proposal does try to get us out of this box that we're in right now," Courtney said during an interview scheduled to air on Sunday on C-SPAN. "It's a good starting point, in my opinion, but it's not a finished product."