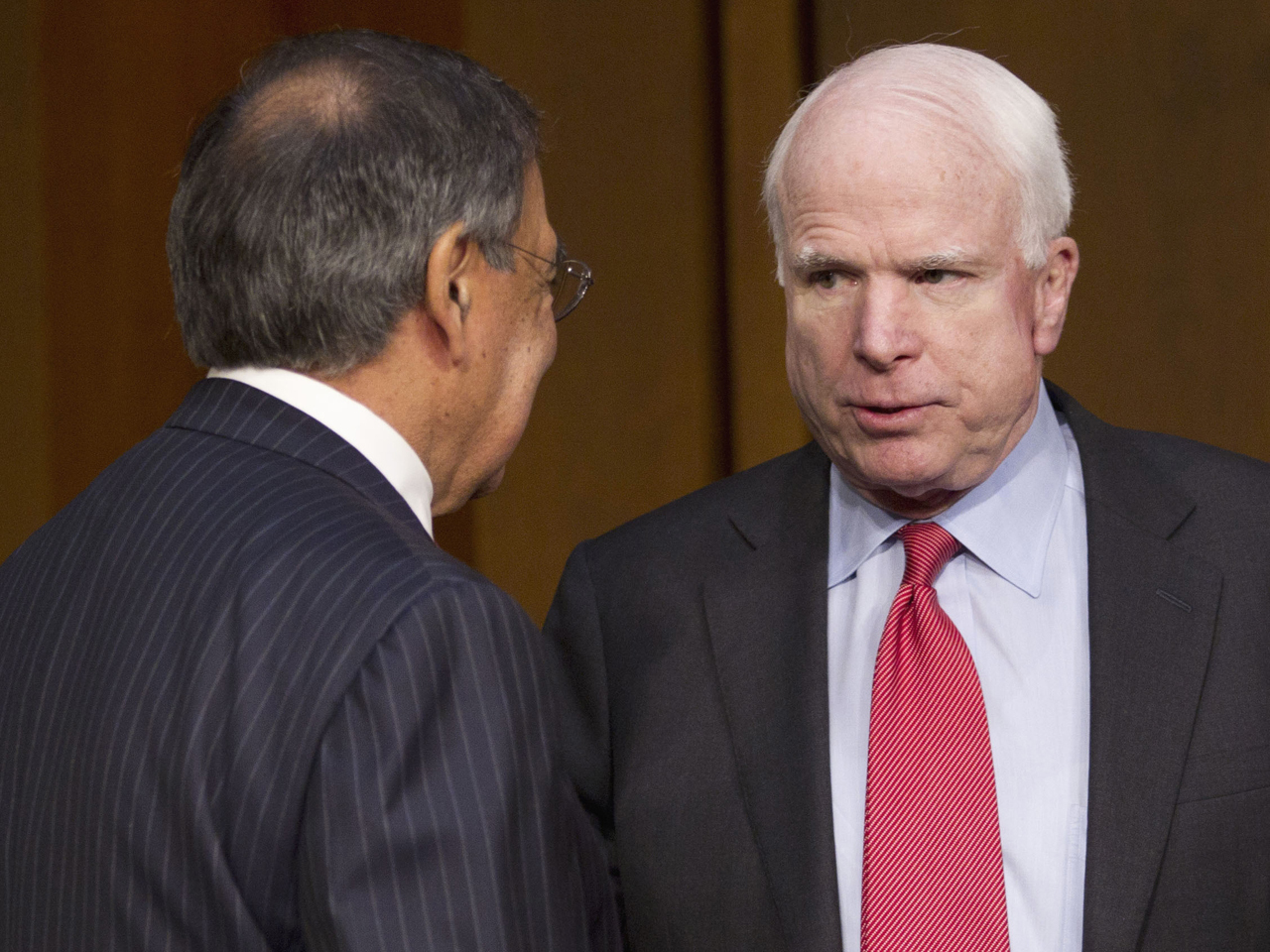 WASHINGTON - Failure by Congress' debt-cutting supercommittee to recommend $1.2 trillion in savings by Wednesday is supposed to automatically trigger spending cuts in the same amount to accomplish that job.

But the same legislators who concocted that budgetary booby trap just four months ago could end up spending the 2012 election year and beyond battling over defusing it.

Sens. John McCain, R-Ariz., and Lindsey Graham, R-S.C., say they are writing legislation to prevent what they say would be devastating cuts to the military. House Republicans are exploring a similar move. Democrats maintain they won't let domestic programs be the sole source of savings.

In the face of those efforts, President Obama has told the debt panel's co-chairmen that he "will not accept any measure that attempts to turn off the automatic cut trigger," White House spokesman Jay Carney told reporters last week. The leaders of both parties in the House and Senate have expressed similar sentiments — seemingly making any attempt to restore the money futile.

"Yes, I would feel bound by it," House Speaker John Boehner, R-Ohio, said recently of the automatic cuts. "It was part of the agreement."

But that doesn't mean rank-and-file lawmakers won't try to block the cuts, or that viewpoints might not change if the right deal is offered — especially in the hothouse atmosphere of next year's presidential and congressional campaign or its aftermath.

With nearly $500 billion in defense spending and an equal amount of domestic dollars at stake, plenty of lawmakers are ready to try blocking all or parts of those automatic cuts, if only to win favor from backers of programs whose funds are on the chopping block.

"I have no doubt that there will be efforts to turn it off," said Maya MacGuineas, president of the nonpartisan Committee for a Responsible Federal Budget. "Never underestimate the willingness of politicians to try to avoid making some of the hard choices."

It's unclear how successful such an effort would be. Not only would an Obama veto be tough to overcome, but pressure from the financial markets on politicians to rein in the government's huge budget shortfalls could keep lawmakers from easing the automatic reductions.

The automatic cuts, enacted in this summer's debt-limit deal between Obama and congressional Republicans, were designed to be so distasteful that they would add pressure on the supercommittee to craft a compromise.

But as CBS News congressional correspondent Nancy Cordes reports, even the leaders of the supercommittee admit they are now close to failure.

"I would have hoped it would have been a deterrent to those who have taken an oath to Grover Norquist that defense of our country" is less important than tax cuts, House Minority Leader Nancy Pelosi, D-Calif., said Friday, in a dig at Republicans who signed a pledge from the conservative activist to not raise taxes.

Norquist has transformed a single issue - preventing tax hikes - into one of the key platforms of the Republican Party. His biggest coup was getting more than 270 members of Congress, and nearly all of the 2012 Republican presidential primary candidates, to sign a pledge promising never to vote to raise taxes. But as "60 Minutes" correspondent Steve Kroft reports, some opponents say the pledge may be hindering a solution to America's debt crisis.

But with prospects dimming for a bipartisan accord by the supercommittee on a deficit-reduction package by this week's deadline, it appears increasingly likely that members of Congress will have to live with the automatic cuts — or "sequestration" — that they built into the law. Little progress was made over the weekend as Democrats and Republicans traded barbs over which party was responsible for gridlock on the 12-member supercommittee.

And while lawmakers of all stripes agree that automatic, across-the-board cuts are no way to run the federal government, the threat hasn't outweighed the differences between the six Democrats and six Republicans on the deficit panel. Democrats are demanding significant tax increases in exchange for savings from expensive benefit programs, while Republicans are refusing to accept such revenue boosts.

The debt-limit agreement requires automatic cuts of $1.2 trillion if the supercommittee produces nothing or if Congress fails to approve a package of that size by Christmas.

By law, 18 percent of the automatic savings are assumed to come from interest costs the government would save from reducing the debt. If the supercommittee fails completely, out of the $1.2 trillion in automatic savings, $216 billion would be assumed interest savings.

The nonpartisan Congressional Budget Office has estimated that for the Pentagon, that would mean a 10 percent cut in its $550 billion budget in 2013 — a huge hit.

"Unless we act today, the dismantling of the greatest armed forces in history could begin tomorrow," Rep. Howard P. McKeon, R-Calif., chairman of the House Armed Services Committee, wrote supercommittee leaders on Friday in a letter warning them of the consequences of the automatic defense reductions.

Senate Minority Leader Mitch McConnell, R-Ky., has said he wants to stick with the automatic cuts but would like to reshape them so they rely less heavily on defense.

Several lawmakers talked of the possibility of easing the impact of the automatic cuts on defense in interviews on Sunday news programs.

Rep. Jeb Hensarling, R-Texas, co-chairman of the supercommittee, said he hopes the current projected split of half defense, half domestic, for the automatic spending cuts will be changed in the event no deal emerges from his panel.

"But I am committed to insuring that the American people get that deficit reduction that they were promised," he said on Fox News Sunday. "But under the law, Congress will have 13 months to do that I n a smarter, more prudent fashion."

"Maybe sequestration is our only way we will get any kind of cuts," Sen. Rand Paul, R-Ky., said on CNN's "State of the Union."

Sen. Jon Kyl, an Arizona Republican, said on NBC's "Meet the Press" he believes the Pentagon cuts would be devastating. "But we do have the opportunity, even if the committee fails, to work around the sequester so that we still have $1.2 trillion in savings over 10 years, but it's not done in the very Draconian way that Secretary Panetta is referring to."

Rep. Jim McGovern, D-Mass., said, "If they're going to try to protect defense, there'll be pushback."

On the domestic side, the law exempts Social Security, Medicaid and many veterans' benefits and low-income programs. It also limits Medicare to a 2 percent reduction.

Still, that leaves education, agriculture and the environment programs exposed to cuts of around 8 percent in 2013, CBO says. For many Democrats, those are cuts worth fighting against, especially if Republicans try protecting defense programs.

The temptation to block the automatic cuts could grow even larger right after the 2012 elections, depending on the results.

The 2001 and 2003 tax cuts enacted under President George W. Bush are scheduled to expire in January 2013. Extending them is a top GOP priority, while Democrats want to let them expire for the highest-earning Americans.

If either party wins White House and congressional control, its members could be ready to reshape both the automatic spending cuts and the tax cuts to their liking.