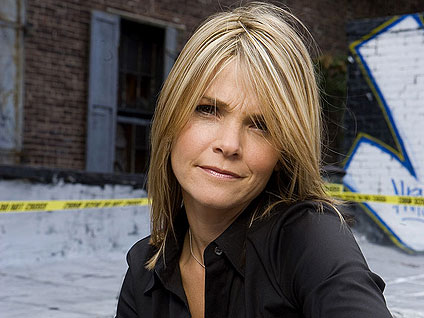 The New York Post reports that a thirty-six-year-old man, Charles Nagle, was arrested  after memorizing Erbe's family members' names and addresses. The alleged stalker reportedly wrote love letters to Erbe over the past two years, but had recently begun sending letters about her to her family members.

During a break on the show's set in the Bronx, Nagle, who goes by "Chaz Rose" and proclaims himself romantic song-writer, allegedly brought his daughter along to try to get a picture with the star. Later, the Post reports, he cropped his daughter's face out of the photo leaving just the obsessive fan with his arm around Erbe. He then used it as his Facebook image.

After Nagle introduced himself, Erbe, who plays Detective Alexandra Eames, realized who he was. The "Law & Order" star and mother of two, alerted NBC's security to watch out for Nagle, says the paper.

Nagle has a blog devoted soley to the Erbe and the show, where he chats about how much he adores her. The Post said a source called his obsession "a case of unrequited love."