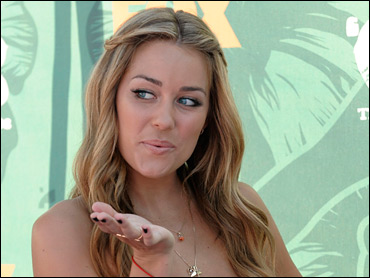 Lauren Conrad wants to be known as more than just the former star of MTV's "The Hills." And now she is.

Her first book for teens, "L.A. Candy" (HarperCollins, 326 pages, $17.99), has topped The New York Times best-seller list for children's chapter books. For two straight weeks, Conrad's novel about a young woman living in Los Angeles, who gets discovered for her own reality show, has made the list.

Conrad, 23, who left the show in May, has a deal to write two more books about the characters. She talked with The Associated Press about "L.A. Candy," paparazzi and frenemy Heidi Montag Pratt's faith.

AP: People are going to read this book and look for similarities in your life but you say it's fiction, right?

Conrad: It's very similar to my lifestyle and the experience that I went through as far as, you know, emotionally and just the changes that just happened in my life, but as far as specific experiences it's different. All the things that happened in this book were made up.

AP: What did you learn about writing a book?

Conrad: The deadlines can be stressful because it's kind of a forced creativity. You want to take your time and the publisher's like, `Yeah, but we're gonna need it in like a week.' I kind of felt my first draft needed to be perfect, and I learned as I went along you can make changes and figure it out along the way.

AP: Heidi Montag Pratt was very vocal about her faith on "I'm a Celebrity ... Get Me Out of Here," which we never saw on "The Hills." Was she always that religious when you were roommates?

Conrad: She was religious definitely. I don't think she was as vocal about it but, yeah, I remember she usually had a Bible by her bed.

AP: There are pictures of you every week in the tabloids. Do you feel a pressure to always look presentable when you leave the house?

Conrad: I used to get stressed over it. I moved actually to a different area. In our old home we had anywhere up to six cars waiting full of photographers outside. If I wanted to walk my dog, run out to the grocery store real quick, it was like a thing. I remember there were days I felt I couldn't leave the house ... I don't really care as much anymore.

AP: What's it like to be in line at the grocery store and see your face on the cover of a magazine?

Conrad: I try to ignore it unless it says something bad and then I'm like, `Bummer! I just wanted to get produce.' (Laughs.)

AP: At what point did you realize with all the things you've gotten to do that your life had taken an extraordinary turn?

Conrad: It still surprises me every day. It's still surreal. You can't help but feel lucky that I got to do so much for just being me.

AP: You have a deal to write two more books but what else do you want to do?

Conrad: I really, really want to produce. That's the top of my to-do list.

AP: Do you keep in touch with anyone from "The Hills"?

Conrad: Lo (Lauren Bosworth) is still my roommate and I speak regularly with Stephanie Pratt (Spencer Pratt's sister) and Whitney Port is a very good friend.