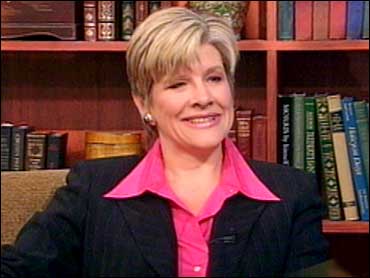 But despite the high profile of her position, first lady Laura Bush manages to smoothly navigate around all the shoals that accompany being first lady.

Now, her life story is being told in a compelling new book called "The Perfect Wife: The Life and Choices of Laura Bush."

"She has no capacity to work a room the way people do in Washington, the phony way, where they're always looking over your shoulder. She's genuinely interested. I think that's what really translates to everyone and that's why people really like her."

And that is reflected in the way the White House is run. You don't see a lot of big state dinners or the Bushes hanging out with celebrities.

Gerhart says, "I think that's one of the things she does for herself and for him, to keep him sound and grounded. They still have the same friends they had 30 years ago. Those friends are very important to them. They bring them to the ranch and they bring them to Camp David and that really regenerates and renews them."

Gerhart brings out in her book an incident that impacted the first lady's life that may not be well known. While in high school, she ran a stop sign and suffered a car accident that resulted in the death of a classmate.

Gerhart explains, "I think it was obviously a really traumatic thing to happen to her. It was an accident. I think that she understood from that moment on that life is fleeting. And I think that, also, she was inclined to be shy and reserved, anyway. She was an only child, used to spending a lot of time by herself. But I think it made her even more withdrawn and more reserved. I think it's made her more compassionate universally, even more than her husband, who tends to see black and white. I think she is more nuanced in her thinking, more empathetic, less inclined to judge others."

Looking back at the first ladies' styles and impacts, Gerhart says she would compare it with Lady Bird Johnson.

She says, "I think history will have to judge her because she is so private and she doesn't really reveal much about what she tells him (the president). She always keeps that quiet. We may not know some of that for years. But I think she's probably most like Lady Bird in the sense that she's very bright. She has her own interests. And, yet, her paramount concern is making sure she can support him in any way possible."

Read an excerpt from "The Perfect Wife":

We feel really fortunate to have grown up in West Texas where I think values are really rock solid. It's not very easy to be pretentious ... West Texans will call you down immediately. I think that gave us a really solid base.

She was seventeen, a few days past her birthday in her senior year, a girl with her daddy's car keys. There was a party, on a weeknight. That wasn't much the sort of thing Jenna and Harold Welch let their girl do, go to a party in the middle of the week. But really, Laura was such a good girl, this only child of theirs, an angel, a love. She had never given them a moment's trouble. She was steady and smart and quiet, and her friends were the Brownies she knew from grade school. She always laughed at her father's jokes; he was a cutup, easy and friendly and open. She always sat by her mother, though. On visits to her grandmother some hours away, Laura and her mother would take turns reading in the car out loud to each other, the huge sky of West Texas arching out before them, vast and familiar, Manifest Destiny beckoning in the shimmering of the nighttime stars.

That sky, it let you see forever. Between Midland and Lubbock, some 150 miles apart, nothing stood but a few villages and scrub and electric poles and those lonely oil pumps, dipping up, swinging down, up and down, up and down, a rhythm that gave pace and purpose to an entire region. Midland proper was so orderly, a firm societal stand against the whims and sins of the prairie. There were no bars, and dozens of churches, and the streets were testament to the disciples of commerce who had delivered the good people from a lifetime of grit and toil. Laura lived on Humble Avenue, named, transparently enough, for one of the petroleum conglomerates; the next streets over were Shell and Sinclair. That was Midland in the 1960s, the Midland that Laura's father, Harold Welch, helped to build: Your aspirations could be realized in your address -- Lockheed or Cessna or Boeing avenues for the white-collar engineers, or Yale, Harvard, and Princeton avenues for the East Coast elites, like George Herbert Walker Bush, who came west to seek their fortunes in the fossils.

Those streets were laid out on a tidy grid, with millions of gallons of water sent to sustain lush lawns hardly native to West Texas, lawns that decades later Laura would decide were environmentally incorrect. The people in the houses liked to think they lived tidy lives -- two parents, a carport, drinks at the country club, touch football after church. Beyond the town limits was untameable terrain, a flat expanse of ranchland, parched brown and ocher, unbroken by trees. You could see for miles. And it was dry, and it was clear, and it was so bright at night under the star canopy, and there wasn't traffic back in those days, not like there is today, everybody hurrying over to the Target or the Sam's Club or the Jumburrito. So there would have been no reasonable excuse for even protective parents to say no to a daughter who wanted to go to a party, especially when she was such a good and responsible girl.

And so they said yes.

And Jenna would have had her book, and Harold would have had his television, and after a spell, the phone would have rung with the news, preceded with an, "Ah'm so sorry to have to tell you..." My word, she hadn't been gone but a little while, and now Laura's parents were being summoned to Midland Memorial Hospital.

Laura, they learned, had been speeding blithely out of town about 8 P.M., east on Farm Road 868, her high school friend Judy Dykes in the passenger seat. She never saw the stop sign. She never saw the other car. She plowed right through that stop sign and slammed hard into the 1962 Corvair coming south and with the right-of-way, on State Road 349, the La Mesa Highway. She was fine, really, the officer assured her parents, but bruised and banged up, and awfully upset. Judy was shaking but unharmed as well. But the boy in the other car, well, the force of the broadside impact was so severe that, well...He never had a chance. Michael Douglas, golden boy of Midland, high school track star, was dead on arrival at Midland Memorial Hospital. The two girls were taken there, too, in another ambulance. Mike Douglas's father had been driving another car behind his son. He saw the entire horrific scene, the explosive beginning of a nightmare that haunted him his whole life.

The front-page story in the Midland Reporter-Telegram was blunt and nonaccusatory. "Police said death was attributed to a broken neck," the paper reported, using that passive voice peculiar to newspaper writing. But the news flew through Midland about whose actions had caused that death.

Killing another person was a tragic, shattering error for a girl to make at seventeen. It was one of those hinges in a life, a moment when destiny shuddered, then lurched in a new direction. In its aftermath, Laura became more cautious and less spontaneous, more inclined to be compassionate, less inclined to judge another person.

What made the crash even more devastating was that the boy Laura killed was no stranger but a good friend of hers, a boy from her crowd. Some said Mike Douglas was her boyfriend. Or had been, or maybe she wanted him to be. ...