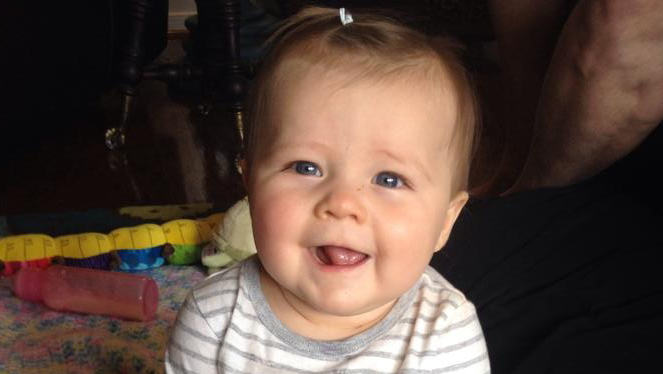 Like any new mom, Jessica Morin can never seem to stay on top of her ever-accumulating pile of laundry. With a baby daughter, the next load was never far away. That's why a few months ago Morin, who lives in Houston, Texas, happily grabbed a handful of liquid laundry detergent packets -- also called pods -- when she happened to spot a container at her sister's place and remembered she had run out at home.

"Mom's diaper bag always turns into her purse," Morin told CBS News, recalling how she put the pods in a plastic baggie and stashed them in the bag that contained diapers, baby wipes and other gear for then six-and-a-half-month-old Marlow.

She certainly never expected that one of those laundry pods would send them rushing Marlow to the hospital a short time later.

"My grandmother was holding her and she was in the prime of teething," said Morin. "My grandma looked into the diaper bag and pulled out one of the pods and thought it was a toy. She only had it in her mouth for a few seconds. She started to cough."

Morin quickly called her local poison control center, and soon she was driving her daughter to the emergency room. "In the car, on the way, she was vomiting all over herself over and over again," said Morin. Though Marlow's exposure was minimal, the baby still required a fluid IV, but was thankfully sent home soon after the scare.

"We call them poison pods now," said Morin. "We stick to the regular liquid detergent now. My daughter only had it in [her mouth] for a few seconds and she was impacted by it, so I can only imagine a toddler going to town on one and swallowing the entire thing."

Marlow was one of a growing number of children harmed by these popular consumer products.

The first comprehensive study on the dangers of laundry pods, published Monday in the journal Pediatrics, found that 17,230 children younger than 6 years old -- an average of one child every hour -- swallowed, inhaled or suffered skin or eye injury from the products in 2012-2013. The study, conducted by researchers at Nationwide Children's Hospital in Columbus, Ohio, found 769 children in the U.S. were hospitalized and one child died after ingesting a laundry detergent pod.

Thirty of the children went into comas and 12 suffered seizures.

"We have never seen anything like this with laundry detergent in the past," Dr. Gary Smith, lead author of the study and director of the Center for Injury Research and Policy at Nationwide Children's Hospital, told CBS News. "This is why we need to get the word out to parents if they decide to use this product among young children."

Smith said that while half of these exposures were "trivial" and did not amount to any long-term damage to the child's health, ingesting the chemicals has the potential to be deadly. The study reported that half of the children who were exposed to the products experienced vomiting. Other effects were coughing or choking (13 percent of cases), eye pain or irritation (11 percent), drowsiness or lethargy (7 percent) and red eye or conjunctivitis (7 percent).

The real scope of the risk may be even higher. "This likely underestimates the problem, because these are only parents who called poison control," medical contributor Dr. Holly Phillips said on "CBS This Morning." "Some people might try to deal with the problem at home or call their doctor directly."

Phillips said her own 2-year-old tried to grab a similar pod of dishwashing detergent that she thought contained juice. "Wow, what a wake-up call," she said. She said parents need to be just as careful about locking up detergent pods as they are with bleach, drain cleaner and other toxic household chemicals.

Convenience drives the home cleaning products industry, which is why laundry pods have become one of the hottest items on the market since they were first introduced in 2010. However, it didn't take long for their risks to start to emerge.

In 2012, the Centers for Disease Control and Prevention published a report urging clinicians to be aware of the risk of poisoning from laundry pods and to look for symptoms in young children.

Brian Sansoni, a spokesperson for the American Cleaning Institute, told CBS News poisoning incidents can occur because the detergent is highly concentrated, more so than in the bottled liquid form. "Remember, you can wash an entire load of clothes with just one packet," he said.

Smith believes the industry has not done enough to child-proof the product, which sometimes come in easy-access Ziploc-style bags.

But Sansoni said the industry has taken note of the public health concern. "Manufacturers have made major changes to their packaging including the addition of easy-to-understand safety icons, improving warning labels to advise proper use and storage instructions, and changing to opaque packaging so the single dose packets are not visible from the outside," he said.

He added that the institute, along with a number of manufacturers, recently launched a consumer laundry safety program to help educate parents and caregivers.

Smith believes packaging of the products is not sufficiently regulated -- a problem he sees across the consumer market from furniture to home electronics to e-cigarettes. "What I've been saying for years is one of the problems we have with protecting children is that our environment, our products, are designed by and for the convenience of adults."