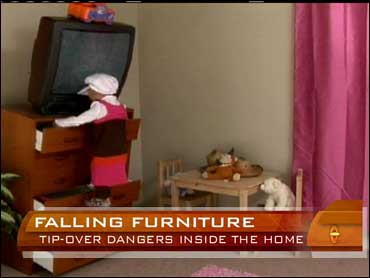 If you have small children, you may want to take a closer look at the furniture in your home. That's because an alarming number of children are injured or killed by furniture that tips over.

Early Show Consumer Correspondent Susan Koeppen gave tips on what parents can do to keep their families safe.

According to Koeppen, a study released today says that injuries have actually increased 41 percent over the past 18 years - with nearly 15,000 people hurt every year because of falling furniture.

Judy Lambert knows the pain of losing a child because of furniture that tipped over. Her 3-year-old daughter, Katie, was killed by a falling wardrobe.

"I heard a loud crash, and ran, got to the room within a second or two, and didn't see Katie," Lambert said. "I saw the mirrored wardrobe was smashed into a thousand pieces and she was underneath."

According to a comprehensive study conducted at Nationwide Children's Hospital in Columbus, Ohio, between 1990 and 2007, more than 260,000 children received emergency room care because of tip-over related injuries.

There were 300 deaths, and most of the injuries were to children ages 6 and under.

"Far and away the most common type of furniture that's related to tip overs is the television," said Dr. Gary Smith, lead researcher. "The traditional set is front heavy so it's prone to tip over and that's why we see so many of them among young children."

Three-year-old Michael Stevenson was hurt when a television set on top of a dresser came crashing down on him and his 5-year-old sister.

Michael suffered two skull fractures, hearing loss in one ear and paralysis on one side of his face.

Koeppen showed a video, released by the Consumer Products Safety Commission, that demonstrates what can happen to a child when furniture tips over.

According to the CPSC, there have been at least three deaths so far this year because of falling furniture -12 deaths in 2008 and nine in 2007.

Lambert says before her daughter's accident, she had no idea that furniture could be such a hazard in her home.

"I want all parents and caregivers to be aware that these accidents can happen," Lambert said.

What can parents do to prevent this danger in their home?