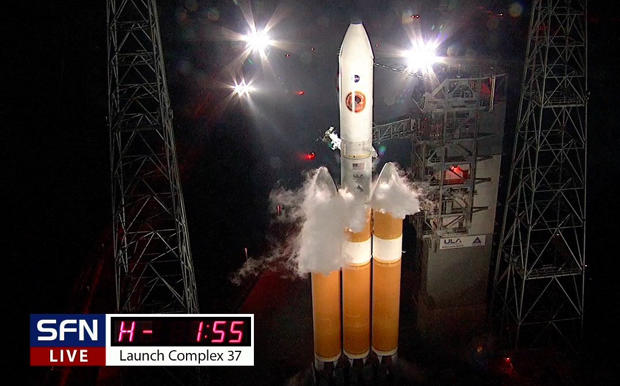 The launch of NASA's $1.5 billion Parker Solar Probe atop a heavy-lift Delta 4 Heavy rocket was scrubbed at the last minute early Saturday because of a technical glitch that could not be resolved before the launch window closed.

NASA and rocket-builder United Launch Alliance plan to make another attempt to get the long-awaited mission off the ground Sunday at 3:31 a.m. EDT (GMT-4), the opening of a 65-minute window, assuming the problem is corrected by then. Forecasters are predicting a 60 percent chance of acceptable weather.

The Delta 4 Heavy's countdown ran into problems before fueling late Saturday, prompting ULA to delay the launch from 3:33 a.m. Saturday to 3:53 a.m. Then, inside of 10 minutes to launch, a hold was ordered due to problems with a data stream from the rocket.

The countdown finally came out of a built-in hold at the T-minus four-minute mark, ticking toward a launch attempt at 4:28 a.m. when an engineer called out "hold, hold, hold" at the T-minus one-minute 55-second mark.

The problem with a helium pressurization system could not be resolved in the 10 minutes left in the launch window, forcing ULA to order a 24-hour delay.

"The team received a gaseous helium reg pressure alarm that kicked them out," said Mic Woltman with NASA's Launch Services Program. "The team is evaluating that. Unfortunately, we didn't have enough time this evening to go troubleshoot that and try again for a launch. So we're going to plan for a 24-hour turnaround."

The Parker Solar Probe is the most ambitious sun-study spacecraft ever built, designed to repeatedly fly through the sun's outer atmosphere, or corona, to learn more about the mechanism that heats it to millions of degrees and accelerates charged particles in the solar wind to supersonic velocities.

The powerful Delta 4 Heavy and a solid-propellant upper stage will provide the energy needed to counteract Earth's 18-mile-per-second orbital velocity, allowing the Parker Solar Probe to fall into the inner solar system.

Once on its way, the spacecraft will fly through 24 elliptical orbits around the sun, eventually passing within just 3.8 million miles of the star's visible surface, enduring temperatures of 2,500 degrees as its instruments collect data from the closest vantage point ever attempted.