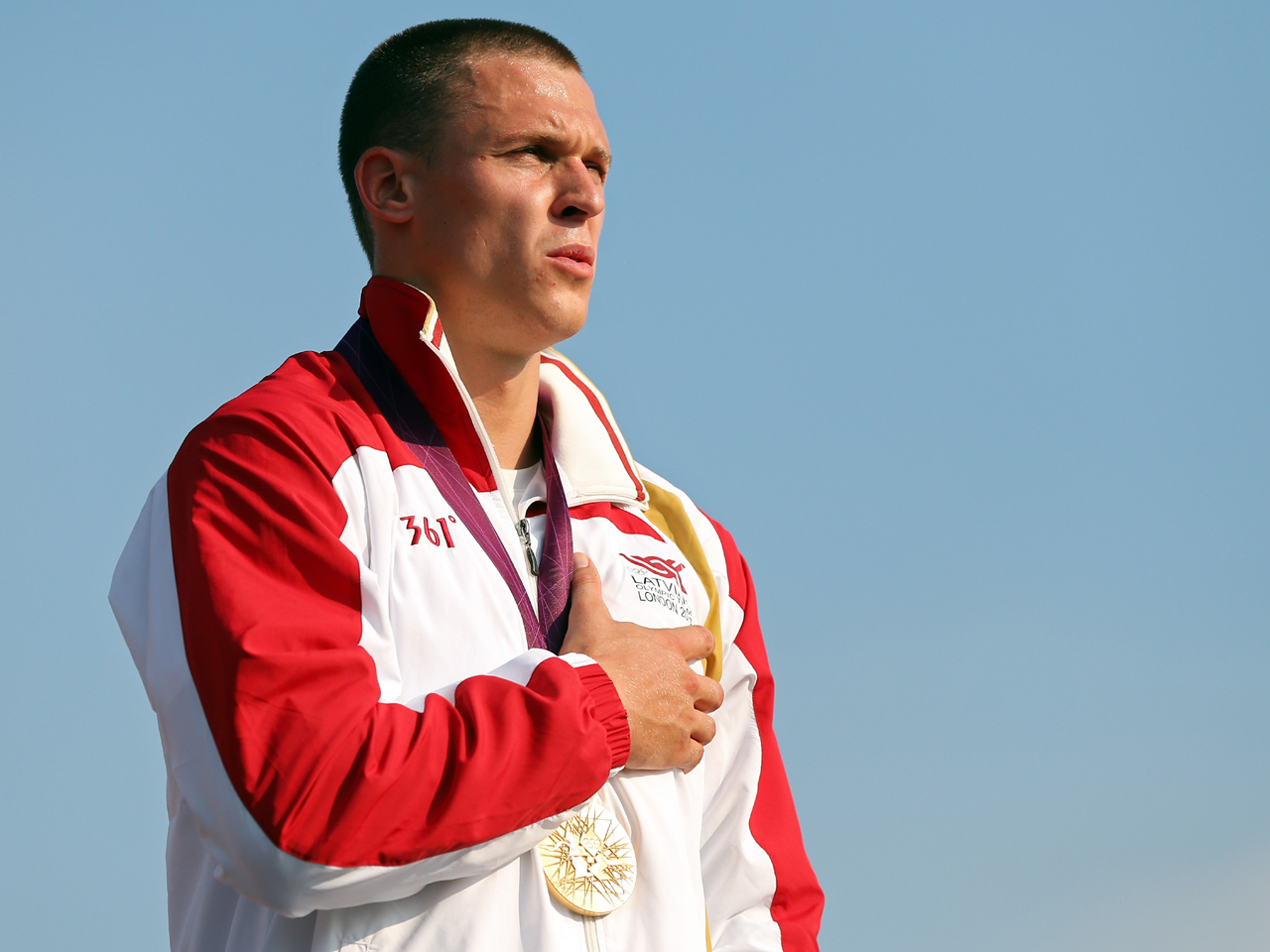 (AP) It was already hard for Maris Strombergs to go unnoticed in Latvia after winning his first Olympic gold medal.

Imagine what it'll be like now that he has two.

Strombergs defended his BMX title on Friday over a harrowing course in Olympic Park, taking the lead and never relinquishing it. He cruised across the finish line in 37.576 seconds to add to the gold medal he won in Beijing, when the sport made its Olympic debut.

Strombergs was chased the entire way by Australian rider Sam Willoughby, the world champion, who held on for silver. Carlos Mario Oquendo Zabala made it a banner afternoon for Colombia with bronze, adding to teammate Mariana Pajon's gold in the women's race.

"It's just amazing," Strombergs said. "I think everyone at home, they watched the race, and deep inside they were hoping I could repeat, and I think my country believed in me."

Athletes from Latvia first participated in the Olympics in 1924, but they competed for the Soviet Union from 1952-88, during the era of occupation. When the Soviet Union finally crumbled, Latvia made its return as an independent nation at the 1992 Barcelona Games.

Igors Vihrovs won Latvia's first Olympic gold in the floor exercise in gymnastics in 2000. It wasn't until Strombergs stood on the podium four years ago in China that a nation with a population of just over 2 million had its second.

Now, fans back in Latvia are celebrating a third.

"Latvia is a small country - it's not big," Strombergs said. "When I go home, they recognize me, but you know, I don't really focus on it. My main focus is BMX, and just doing my thing."

Doing it better than just anybody else.

Strombergs wasn't considered among the favorites coming into the Olympics, despite a resume that includes two world championships and numerous World Cup victories.

He's struggled with injuries the past couple years, and a particularly hard crash in November 2010 left him with a broken hand, dislocated wrist and damaged shoulder. He required two rounds of surgery and couldn't compete for about six months.

"Coming back from my injury, I wasn't focusing on the Olympics," Strombergs said. "It was all about myself, getting my confidence back, getting right physically, back to where I was before.

"The Olympics at that time was far away," he said, "but it was in the back of my mind."

Strombergs won a World Cup race in the Netherlands this year to gain confidence, but he wasn't dominant in London. He only managed a second and a fifth before winning his final quarterfinal heat, then squeezed through his semifinal as the third of four qualifiers.

Perhaps he was saving his energy for when it mattered.

Strombergs was first down the starting ramp in the final, carrying plenty of speed through the first two jumps and getting ahead of traffic entering the difficult first corner.

Willoughby slid in behind Strombergs and Liam Phillips of Britain was third, but Phillips wiped out as he was being passed by Oquendo, knocking him out of contention.

The three leaders navigated the rhythm section heading into the final corner, and the bump at the start of the final straight that felled several riders during the competition caused no problem.

Strombergs raised his arms in triumph as he crossed the finish line first, followed closely by Willoughby and Oquendo to round out the podium.

"For the four years, it hasn't bothered me and yesterday it all got to me and I was a wreck," Willoughby said. "I pulled it together today, which I was really proud of myself, although I didn't ride as good as I think I could've. To come away second with a silver medal, I'm stoked."

"Ten weeks ago I was having surgery on my shoulder, broken collarbone, broken shoulder blade, ribs. I have sort of defied all expectations really just to be here," Phillips said. "I'm pleased, although obviously at the moment I am disappointed."

Joris Daudet, the reigning world silver medalist and former world champion, missed the final when he crashed in his last semifinal race. Daudet lay for a moment on the asphalt before getting back on his bike and pedaling across the finish.

It was Daudet who called crashes part of the "beauty" of BMX after the quarterfinals.

"Perhaps, I didn't have luck. Perhaps, it's my fault as well," he said. "I came here for a medal. Even reaching only the final would have been disappointing. I don't know what to say."