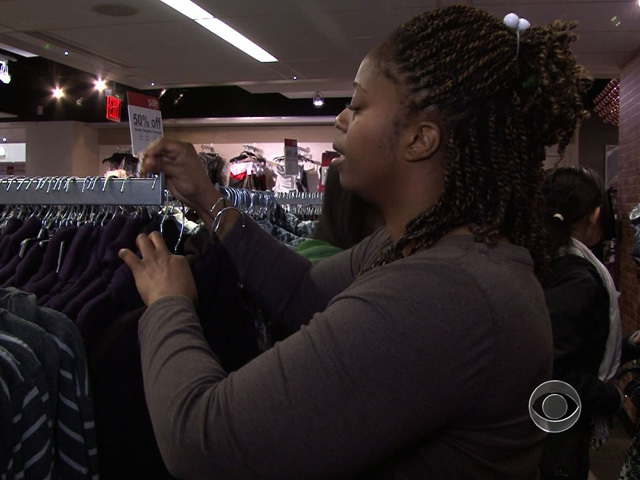 For even the most hardened of procrastinators, time is running out. Just two days after a Consumer Reports poll found that 25 percent of Americans hadn't started their shopping yet, it appears that most of the last-minute shoppers were jamming the stores today. CBS News correspondent Tony Guida is on the front lines:

T'was the night before Christmas and all through the mall/Holiday shoppers, who didn't want to be here at all.

"My mother made me do it," said Raquel, a shopper. "I didn't want to come out here, but she made me come out."

There was the occasional exception.

But exceptions usually prove the rule.

"I'll be willing to bet that last year at Christmas you said, 'Next year, no more last day,'" Guida asked shopper Tina Moore.

Moore was at JC Penney's in midtown Manhattan shopping for her mother and her cousin. She thought she might just pick up something for herself, too. Similar intentions, probably, for the 125,000 last-minute minute shoppers expected Saturday at the Mall of America in Bloomington, Minnesota.

At Best Buy stores across the country, the catnip was a sale of the iPhone 4: two for the price of one. The 2011 shopping season is ending not with a whimper, but a bang.

"Retailers don't want to have any merchandise left on their shelves," said Kim Yarrow, retail analyst, "and so they're slashing their prices today knowing that consumers are going to buy today and that's going to be it."

Santa showed up early at this K-mart in Tulsa, Oklahoma, paying off, anonymously, the layaway balances of 86 customers.

This woman was one of them. "It's been a really hard year, and God bless this."

Back at JC Penney's in New York, Anthony Moore had picked out three sweater dresses, but he was having trouble deciding if any was right for that certain someone.

Which raises the question of what happens when loved ones don't love what they've received. Consumers are expected to return more than $46 billion-worth of gifts starting Monday, says the National retail federation -- 10 percent of all the swag purchased this holiday season.