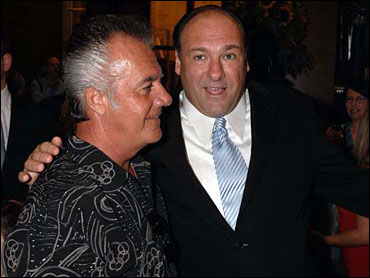 Will "The Sopranos" bury its Emmy competition Sunday? Will Ryan Seacrest shine as the ceremony's host or hit a sour note? Will controversy help or hurt contenders "Grey's Anatomy" and Alec Baldwin?

And most importantly, will anyone be watching the 59th annual Primetime Emmy Awards (8 p.m. EDT, Fox), given that it's airing against a big-time NFL matchup between the Chargers and Patriots on NBC?

Viewers who snub the awards pageant will miss out on high drama, cautioned Tom O'Neil, author of "The Emmys" and host of theenvelope.com, an entertainment awards Web site.

"You have the breakout hit comedy and drama shows, 'Ugly Betty' and 'Heroes,' competing for top series awards," O'Neil said. "And the stars of those shows are clashing with TV royalty: 'Ugly Betty's' America Ferrera is competing with Felicity Huffman and Julia Louis-Dreyfus."

"Those are exciting diva clashes," he said. Huffman is nominated for "Desperate Housewives," while Louis-Dreyfus is trying for consecutive trophies in the comedy actress category for "Old Christine."

Their other rivals are Tina Fey for "30 Rock" and Mary-Louise Parker for "Weeds."

As for Seacrest - who's proven himself a smooth host on "American Idol" if not a comedian - "sometimes just a ringmaster works," O'Neil said.

Seacrest could be dealing with a three-ring circus. The TV academy has dropped coy hints that Justin Timberlake might perform the song from "(Blank) in a Box," the racy "Saturday Night Live" fake music video about a gift-wrapped part of the male anatomy.

If Kathy Griffin is any inspiration, the winners' speeches could be interesting. Griffin's acceptance of a creative arts Emmy trophy last weekend for her reality show, "My Life on the D-List," was to be censored for the show's weekend airing on the E! channel.

But there's even the possibility of substance as well as flash Sunday.

Former Vice President Al Gore, whose global-warming documentary "An Inconvenient Truth" received an Oscar earlier this year, could be an Emmy winner. Current TV, his youth-oriented channel featuring viewer-created videos, is up for best interactive TV programming. (The juried award can have more than one winner or none.)

The Emmys could be meaningful as well for "30 Rock," the critically acclaimed but low-rated sitcom created by Fey. It's up for best comedy series and Baldwin has a shot at best comedy actor.

Winning a top trophy helped "Cheers," "Hill Street Blues" and "All in the Family," which once found themselves in the same tenuous position as Fey's small gem. After the shows were anointed by Emmy, audiences discovered them and they became long-running, influential hits.

Baldwin's chances may depend on how voters feel about him, not just his acting. In April, the divorced dad was caught yelling at his daughter on a leaked voicemail message. He also has declared that he "couldn't care less" if he dropped acting in favor of focusing on parents' rights.

Competing against Baldwin are Tony Shalhoub, "Monk"; Steve Carell, "The Office"; Charlie Sheen, "Two and a Half Men" and Ricky Gervais, "Extras."

Whether behind-the-scenes events count in the Emmy race also could be an issue for "Grey's Anatomy," which is up for best drama series and saw four cast members nominated in the supporting categories (stars Ellen Pompeo and Patrick Dempsey were snubbed).

The series was rocked by Isaiah Washington's use of an anti-gay slur involving cast mate T.R. Knight. The turmoil culminated with Washington's firing from the hit medical drama.

All the drama for "The Sopranos" was on-screen, which famously faded to black in the final scene of the final episode of the landmark HBO series. It's going out in a blaze of glory, vying for best drama series and with acting nominations for five of its stars.

History might be working against the modern mob saga: It's rare for a drama to be crowned best series after it's off the air. That quirk might open the way for a surprise winner, maybe "Grey's Anatomy" or the freshman sci-fi sensation "Heroes."

There could, however, be Emmy riches for the "Sopranos" cast, including stars James Gandolfini and Edie Falco and, with supporting nods, Michael Imperioli, Aida Turturro and Lorraine Bracco.

While departing dramas usually lose out, that doesn't hold true for their stars. Alan Alda, for instance, was honored last year for outgoing "The West Wing."

Gandolfini's toughest competitor could be Hugh Laurie of "House," a Golden Globe and Screen Actors Guild winner who's been waiting for his Emmy. Other nominees are James Spader, "Boston Legal"; Denis Leary, "Rescue Me," and last year's winner, Kiefer Sutherland, "24."

In the pattern of recent years, HBO claimed the most nominations, 86, and came out of last week's creative arts Emmy awards (for technical and other achievements) with a leading 15 honors. With "The Sopranos" and leading nominee "Bury My Heart at Wounded Knee" in the hunt, HBO looks like it will keep its winning streak alive.
By LYNN ELBER