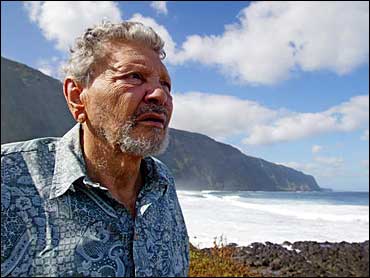 Between the tears and memories of hundreds of funerals, Paul Harada finds some comfort in the feeling that his dead friends and neighbors are now free.

"In fact, I think these are the lucky ones - they're not going to suffer any more," he said.

Stricken with leprosy as a teenager, Harada was torn from his family and banished to this isolated peninsula on the island of Molokai to die. Today, Harada, 76, is one of the last 40 elderly patients of Kalaupapa, where thousands from the Hawaiian islands were quarantined from society over the last century.

Harada has had the option of leaving this place of exile for decades. Yet, he chooses to stay.

"I'm all crippled. What am I going to do outside?" said Harada, raising his nearly fingerless hands to his aged, tanned face. "How am I going to live?"

Kalaupapa was once a sprawling and lively community with a population of more than 1,000. Now graves outnumber patients nearly 200 to 1.

After being diagnosed with leprosy, now known as Hansen's disease, Harada was forced by the Territory of Hawaii from his home on Kauai to Honolulu before being shipped to Kalaupapa on June 29, 1945, with five other young men and two middle-aged women.

"I kind of accepted the fact that I'm going to come here and die here," he said.

The population at Kalaupapa was more than 400 when Harada arrived, but has steadily dwindled, and so has the number of funerals.

"When I first came over here, the church bell was tolling every day, every day for weeks," he said.

Harada lives with his wife of 48 years, who was also a leprosy patient, and spends his days tending his lush yard filled with tropical flowers, vegetables and fruits - such as bananas, mountain apples, avocados and papayas.

The residents are still called "patients" by each other and the state, although they have all been cleared of the dreaded and disfiguring disease once thought to be a curse.

They live in this tiny ghost-town-like neighborhood consisting of a few dozen rural single-story homes and buildings.

There are no schools, no children, no movie theaters, no sunbathers at the beach, no restaurants or supermarkets. There is no traffic signal for the narrow road that winds through the settlement to the airport that resembles a barn.

The Kalaupapa Peninsula is surrounded on three sides by the white-capped waves of the Pacific Ocean, with the rugged green cliffs of Molokai on the fourth. It is accessible only by small planes, boat or mules that carry tourists down the steep cliff trail.

Kalaupapa was named a National Historical Park in 1980. After the last patient dies or moves away, the peninsula will be administered by the National Park Service.

"It's really no different than living in any small town," said Michael McCarten, the state Health Department administrator for the settlement, who lives in Kalaupapa four days a week.

Some patients sip afternoon beers at Elaine's Place, a patio of a house turned into a makeshift bar, open a few hours a day when owner Elaine Remigio, 80, wants to.

They'll occasionally travel to another Hawaiian island, but Las Vegas is their favorite destination.

"That's the only place they go," said Richard Marks, 73, a patient and the local sheriff and historian. "They say, 'People stare at me, I'm disfigured, I don't want to go out in public.' The next thing you ask them, 'Do you want to go to Vegas?' They say, 'When? When? When?"'

One man told Marks he likes the Hawaiian food in Las Vegas.

Everyone attends one of the three active churches in Kalaupapa. There are seven Protestants, three Mormons and 30 Roman Catholics.

"You take religion for what it is and it keeps you very stable," said Harada, a Catholic. "I think religion is the greatest thing that has ever happened to me and I'm very happy with that."

About 8,000 people have been exiled here since 1865, when King Kamehameha V instituted an "Act to Prevent the Spread of Leprosy," that forced people with leprosy or anyone suspected of having the disease to be secluded on land that was set apart. The law remained in effect until 1969, when admissions to Kalaupapa ended.

However, some of the rules remain in place. All visitors must be at least 16 years old and have a permit from the state Health Department. A maximum of 100 visitors are allowed on the property a day, including state and federal workers.

There's still no road that connects them with the rest of island, or "topside Molokai."

Once a year, the residents celebrate "barge day," when heavy items - televisions, home-building supplies, appliances, cars and other items - are brought in on a ship.

Fresh milk, vegetables, bread and meat are all brought in regularly by airplane, along with newspapers.

A few homes that used to house patients are now vacant. There are also relics of old buildings, including the Federal Leprosy Investigation Station.

The state provides the patients with medical care, housing and a modest pension, which kept most patients in this simple and quiet community.

"To simply put it, it's their home," McCarten said. "The average patient has been here 50 years. ... They have become so used to an isolated way of life, they're somewhat uncomfortable on Oahu or some place like that."

Many have tried life outside Kalaupapa, but some returned when they couldn't find work and were outcast by their neighbors and sometimes their own families.

"Some of them couldn't stand it," Marks said.

Makia Malo, who was sent to Kalaupapa in 1947 when he was 12, is one patient who a found life on the outside. Even though leprosy stole his sight and the feeling from his hands - preventing him from reading Braille - Malo moved to Honolulu and enrolled at the University of Hawaii at age 37.

By listening to lectures and tapes while taking oral exams, he graduated seven years later with a bachelor's degree in Hawaiian studies.

"It was somewhat scary because in the back of my mind, I wasn't sure how people would accept me," said Malo, 68, who now splits his time between Honolulu and Kalaupapa.

He found the struggle assimilating back into society was even more trying than the academics.

"One of the worst things about having had this disease is that even after you're cured, society will not let you heal because of 'L' word," Malo said. "People don't know how hurtful and wrong that term is."

Although leprosy patients can be freed from the disease with antibiotic treatment, the stigma can last a lifetime.

The public is still frightened of the disease, Marks said. "They have all the worst ideas about leprosy being such a contagious disease, which is plain nonsense. Over 1,100 people have come here to work since Father Damien, and Father Damien was the only one who got the disease," Marks said, referring to the Belgian priest who ministered to patients from 1873 until his death in 1889.

He remembers an Australian doctor who visited Kalaupapa.

"She gets off plane and she looks like she's a beekeeper," he said. "The hat, veil and everything else."

Marks recalls what happened when he picked up a paper bag that she dropped.

"She hollered, 'Don't you touch that. Don't you know these people are lepers here?"' he said. "I mean this was eight years ago, not 100 years ago. There's just not enough information."

Harada was first allowed to leave the 8,725-acre peninsula in 1954 when he was cured of Hansen's disease, which destroys the nerves and skin. But by that time, the disease had taken away most of his fingers as well as the feeling in his hands and feet.

"When I was young, I was like everyone else, with hair and everything else," he said.

Harada said when he eventually visited family and friends, he made sure not to disclose he lived in Kalaupapa, to protect his family. But his secret eventually was exposed, which Harada came to see as "a favor."

Returning to Kalaupapa, he manages to fish and garden despite the damage the disease did to his hands.

Marks, who operates the only tour business on Kalaupapa, has a family history of Hansen's disease. His father, brother, sister, uncle, aunt are all buried here.

Marks was diagnosed with leprosy as a 21-year-old, when a few lesions appeared on his body, and immediately became a ward of the territorial government. But unlike Harada, Marks was already very familiar with Kalaupapa.

"I used to come down at night and visit my dad and go back up," said Marks, who hiked a cliffside trail. "I wouldn't even ask for a permit. But then my mother turned me in because the medications had just come in and she'd seen so much damage to her family. She felt it would be better if I got myself hospitalized while it was still new, before I got crippled."

It's unknown how leprosy was introduced to Hawaii, but it quickly took a toll on the population, especially with the native Hawaiians who had no immunities from the foreign disease.

When the peninsula becomes a national park, residents say they would like to keep the settlement undisturbed and un-commercialized.

They want visitors not only to know about the segregation and suffering of Kalaupapa, but also the lives of the patients.

"It's good place. I have no qualms about this place," Harada said. "It's good enough for me."