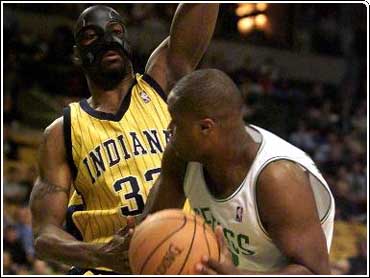 "This is going to be a game that's talked about for a long time," Rose said after scoring 23 points to lead the Indiana Pacers over the Boston Celtics 113-104 Wednesday night. "It's Larry Bird's last game where he won all those championships."

Rose scored 15 of Indiana's last 17 points as the Pacers held off a late Celtics charge. Dale Davis had 16 points and 11 rebounds and Mark Jackson had 15 points and nine assists.

"You expect it from Smits and Miller," Celtics forward Antoine Walker said. "Jalen Rose hit some big shots. That's a key for them."

Bird returned to his home state to coach the Pacers after a Hall of Fame playing career in Boston. He has said that he would only coach for three years, a position he reaffirmed on Wednesday, leaving him with a 10-1 record against his former team.

"June is a long way off," he said. "I probably won't be back in this building, but I'll be back in Boston."

Indiana led 89-83 before Boston scord seven consecutive points, taking the lead on Pierce's 3-pointer with 8:46 left. Sam Perkins answered with a 3-pointer and Derrick McKey had a steal and layup to turn back the threat.

After a Celtics basket, McKey made another layup to make it 96-93. Rose then scored all 13 of the Pacers' points over the next five minutes before McKey's layup made it 111-102.

Boston led 51-41 with 3:30 left in the first half when the Pacers went on a 18-2 run for a six-point lead early in the third quarter. The Celtics tied it 69-69 on Calbert Cheaney's jumper with 6:34 to go in the third before Miller answered with a 3-pointer and Rik Smits added a layup.

Indiana led 82-77 when Pierce slammed home a rebound off Walker's miss. Pierce was called for an over-the-back foul and the basket was disallowed.