NEW YORK (CBS) Former Miss California USA Carrie Prejean made a short but dramatic appearance on Larry King Live Wednesday, in which she refused to answer an openly gay caller and threatened to walk off the show, after King demanded to know why she and Miss California pageant organizers recently settled dueling lawsuits.

"You sued the pageant after they fired you, they countersued, and then you accused them of a number of things including religious discrimination, clearly an issue important to you," King asked. "Why did you settle? You don't have to tell me the terms of the settlement, but why settle since you had a fight to carry on?"

"You know what Larry. Larry. Everything that was discussed in mediation, I'll say it again, is completely confidential. I'm not, I'm not gonna be able to talk about that," Prejean responded.

Prejean recently admitted to creating a solo sex tape for a former lover. Rumors have swirled that pageant organizers had obtained that tape and used it as leverage in their legal battle with Prejean.

But King persisted, "So, you can't even say why you settled? … How does that break what you settled for?"

Prejean insisted it was a confidential agreement and blasted her interviewer, "Larry, you're being inappropriate. You really are."

"What?" a shocked King replied. "I'm asking you a question."

"I'm not gonna talk about anything that was discussed in mediation, it's completely confidential," she said, and again called King "inappropriate."

Then a caller from Detroit joins the two and admits to be openly gay. Prejean disconnects her microphone.

"I'm a gay man and I love pageants," the Detroit caller says. "I'm sure that you, Carrie, have got, you know, great gay friends that helped you possibly win. What would you give them as advice if they wanted to get married?" 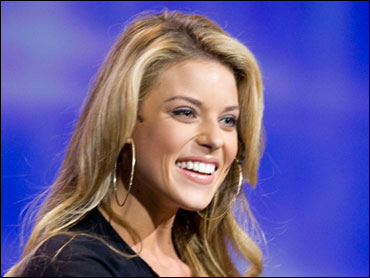 But by now it's too late. Prejean claims not to have heard the question and refused to acknowledge the caller. King asked her to put her microphone back on, but she refused to do so and said, "you're being extremely inappropriate right now and I am about to leave your show."

Prejean was fired from the Miss USA pageant in June. She claims she lost her crown because of her religious views, even apart from her opposition to gay marriage. Pageant organizers said she was skipping official events.

Dueling lawsuits ensued with Prejean claiming she was improperly dismissed and the pageant claiming she still owed them for the cost of breast implants they helped her buy.

Earlier this month, Prejean and organizers reached a confidential settlement in both suits amid reports that Prejean settled quickly because organizers had obtained a copy of a solo sex tape she made for a former boyfriend.

Prejean was on Larry King to promote her new book, "Still Standing: The Untold Story of My Fight Against Gossip, Hate, and Political Attacks."