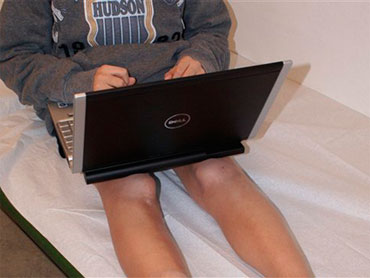 There's new evidence that laptops can put the heat on male fertility.

A new study indicates men who use laptops on their laps may be lowering their chances of fatherhood, CBS News Medical Correspondent Dr. Jennifer Ashton said on "The Early Show."

She pointed out that a recent study in the journal Fertility and Sterility showed the heat from laptops could be overheating testicles. Earlier research found that high temperatures can affect sperm quality.

Computers generate heat and heat can affect sperm, Ashton noted. In the latest study, researchers used thermometers on 29 healthy male volunteers balancing a laptop on their knees. When their knees were together with the laptop perched on top, it took only 28 minutes for the scrotum's temperature to elevate by almost 2 degrees Fahrenheit. The researchers didn't then test the men's sperm. But earlier research has shown that heating the scrotum about the same as the new test did is enough to damage sperm.

The study said use of a laptop pad didn't really decrease the heat, but sitting with the legs apart by 70 degrees did lower the temperature. Really, the best way to beat this heat is to use the laptop on a desk.

Male fertility can also be affected by genetic, biological, or sexual problems -- but, some of the everyday causes of low sperm count include overheating testicles by spending too much time in the hot tub or sauna, using certain medications, such as those for depression or high blood pressure, smoking and alcohol use, and stress, which affects hormones.

Up to half of all infertility cases have to do with the male, Ashton notes, so it's important for the man to get evaluated if a couple is having trouble conceiving -- which is usually marked by one year of trying. Getting evaulated by a urologist or specialist can help couples make decisions about possible treatments or therapies.

Other ways men can optimize their fertility include staying in good general health. Also, it might be a good idea to take a multivitamin with zinc and folic acid, which are important for sperm production. Eat fruits and veggies rich in antioxidants, which may play a role. Reduce stress -- that can really affect your sexual function and -- you guessed it -- get regular exercise, but not too much. Men who do extreme exercise show a drop in sperm quality. The same holds true for weight. Watch your weight, but too much or too little body fat may disrupt reproductive hormones.