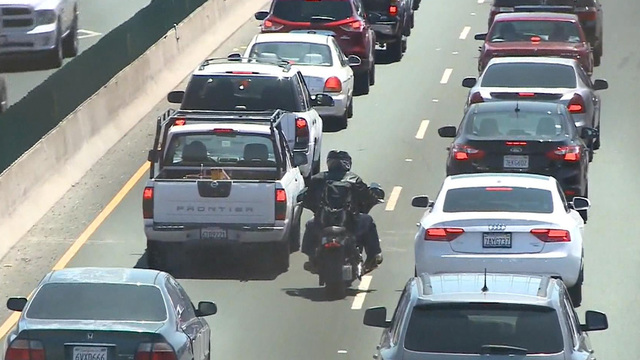 California is a step closer to becoming the first state to legalize "lane splitting," when a motorcycle rider drives between other vehicles on congested streets and freeways. The State Assembly has passed a bill making the practice legal, CBS News' Ben Tracy reports.

In most states, riders must stay in a marked lane, like a car. In California, riding the white lines is allowed but has never been regulated.

Now, the State Assembly has passed a bill that would put strict limits on lane-splitting speeds.

Motorcycles could travel up to 15 mph faster than the flow of traffic, up to a maximum overall speed of 50 mph.

"By allowing them to move between vehicles in a safe manner lessens their likelihood of much more serious injury, and it also allows for the free-flow of traffic," he said.

Although studies indicate careful lane splitting is no more dangerous than other kinds of driving, accidents will happen. Motorcycle rider Robert Gutierrez admitted he couldn't steer clear of a collision in which he was involved.

"I was splitting lanes, and he was coming out, and I was like, 'Oh, should I avoid him or not?'" he said.

While Lackey said his bill moves riding in the right direction, many drivers remain skeptical.

"Accidents happen no matter what miles per hour you're going, so whether it's 15 or 50, if they're not checking the mirrors, you know, good luck," said motorist David Timmons. "You're tempting fate at that point."

Next stop, the State Senate. Lackey hopes the road rules will become law by 2016.

"This measure is so important because it will directly result in the saving of lives," Lackey said.

McDonald's scrambling for healthier menu, but is it enough?