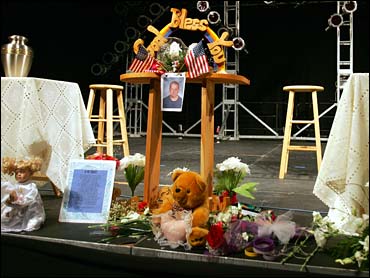 Investigators could take their search for a murder weapon or clues to the disappearance of a boy and his little sister to a landfill as early as Thursday, the sheriff's department said. The landfill is where trash from the area of the family's home was taken last week.

Sheriff Rocky Watson doesn't have anything to go on — no suspects, no leads, no motive. But he has hope that a boy and his little sister will be found safe.

"I have a need to believe those children are still alive," Watson said.

Dylan Groene, 9, and Shasta Groene, 8, were abducted a week and a half ago, probably after they witnessed their mother, her boyfriend and an older brother being bound and then bludgeoned to death inside their rural home, authorities say.

After searching across the Northwest and fielding more than 1,150 tips, the FBI and local investigators say they have no idea why the victims were killed and the youngsters taken.

CBS News Correspondent Stephan Kaufman reports that authorities are about to dig for evidence at a landfill. Sheriff's department captain Ben Wolfinger says investigators are specifically hunting for garbage that was hauled off from two dumpsters from behind the crime scene during the two days before the murder victims were found.

A memorial service was held Wednesday at the Real Life Ministries church for Brenda Groene, 40, and 13-year-old Slade Groene. Mark McKenzie, 37, will have a private service.

"Those who hurt children, God will take care of," said Pastor Bill Putman. "I tell ya, hell's a long time."

Brenda Groene and other family members had done drugs and committed petty crimes over the years, but investigators have not publicly connected any of that to the slayings.

Public suspicion has centered on Steven Groene, Brenda's ex-husband. But deputies insist he is not a suspect, even though he has no alibi for the night of the slayings, failed a lie detector test when asked if he knew the whereabouts of the children, and issued a puzzling public plea for the return of Dylan and Shasta.

Although he attended Wednesday night's memorial, he said nothing at the service, or afterward to reporters.

"Please, please release my children safely," Groene said last week. "They had nothing to do with any of this."

Officers could not say what "any of this" referred to.

Because the Groene home is close to Interstate 90, just west of a pass in the Rocky Mountains, investigators have said it is possible a random motorist committed the crimes and then jumped onto the highway heading toward Montana or Seattle.

Steven and Brenda Groene were married in 1986 and had five children before they divorced in 2001. In a television interview, Steven Groene said he and his ex-wife had squabbled over visitation rights as recently as a few days before the slayings, but otherwise got along.