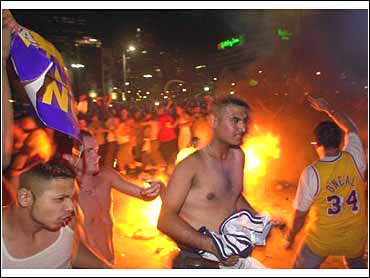 Businesses were vandalized, and fans threw rocks at baton-wielding lines of police. At least 12 injuries were reported.

Scores of police on horseback and motorcycles, some of them in riot gear, swept thousands of people away from the Staples Center, forcing the rowdy crowd south through downtown. Fire engines raced down streets to put out small bonfires, including three near the Original Pantry, a restaurant owned by Mayor Richard Riordan. Some revelers threw bottles and rocks at police.

City fire spokesman Brian Humphrey said 12 people were injured, most of them with bumps and scrapes.

Rioters also smashed the windows at two car dealerships near the arena. But no incidents of widespread violence were reported elsewhere in the city, and police said they had made no arrests after nearly three hours of violence.

There was glory tonight and there was sadness, Riordan said. I condemn the lawlessness of so-called fans who destroyed property and endangered the safety of fans and families in the vicinity. Even though the unrest did not spread citywide, it was reprehensible nonetheless.

I urge you with all my heart, please, please calm down, Lakers owner Jerry Buss said. Go home, celebrate and let's all enjoy this victory without provoking criticism.

Magic Johnson, a Lakers vice president and member of the last championship team, called the violence a shame.

That takes away from what happened here tonight, he said.

Nearly 10,000 people had gathered around the arena by the time the basketball game ended in a 116-111 Lakers' victory over the Indiana Pacers, with nearly 20,000 more still inside. As violence erupted outside, fans were kept inside as a precaution and authorities barred the Pacers' team bus from leaving for 2½ hours.

On the sidewalks outside, police guarded firefighters dousing one of the two police cars set afire.

Live television captured rioters vandalizing and burning cars for up to 15 minutes before police chased them away. Officer Jason Lee, an LAPD spokesman, defended the response.

Our job is to protect lives and property, he said. We don't just let things happen. We have to formulate a plan and move in. We on't just rush in there.

The crowd was mostly peaceful until nearly an hour after the game, when fans began throwing debris at limousines. The crowd smashed the windows on a white sport utility vehicle and a television news van.

Dozens of men used boards and tree limbs to strike the vehicles, while others looted fire extinguishers and other items from the van.

As the crowd was cleared away, smaller groups set small bonfires, including one at an intersection two blocks away that backed up traffic before it was extinguished.

Humphrey said the fires did not pose any threat to people or property and said they were fueled primarily by trash and Pacers' T-shirts.

Cars trying to maneuver around the blazes crawled slowly. Some people jumped atop the vehicles and punched out car windows.

Figueroa Street, a main downtown thoroughfare newly paved for the Democratic Convention in August, was littered with garbage cans, trash and newspaper racks. Scores of people were stranded in downtown as hundreds of police and mounted officers blocked off the streets.

Many in the crowd insisted they were trying to show their excitement for the team, chanting 12 Years! 12 Years!" as they ran through the streets.