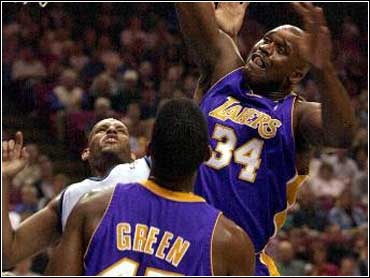 The All-Star center's steal and dunk tied the score in the closing seconds of regulation, then his seven points in overtime propelled the NBA's best road team to a 107-99 victory over the Orlando Magic on Friday night.

O'Neal went 15-for-22 from the field and was 9-for-13 from the foul line to finish with 39 points. He also grabbed 16 rebounds and blocked three shots against his former team, which led 88-86 before the NBA's second-leading scorer made the defensive play of the night to send the game into overtime.

"My new nickname is the Big Felon because of my stealing ability," O'Neal said. "It was a sweet moment because we threw the ball away two times in a row. Luckily, I got the steal and we won it in overtime."

The victory was the sixth straight for Los Angeles, which improved the NBA's best road record to 17-7. Orlando, which had won nine of 11 to pull within one game of .500 for the first time in six weeks, had its winning streak stopped at five.

Magic coach Doc Rivers thought his team deserved a better fate after spending much of the last three quarters fighting back from an 11-point deficit.

Glen Rice had 26 points for the Lakers. Kobe Bryant was limited to 11 points on 4-for-10 shooting.

"They played so hard, and you just wanted them to win the game and not have a moral victory. We had the moral victory with six minute left (in regulation)," Rivers said. "But you have to play 48 minutes. It came down to bad execution of one play."

The Lakers turned the ball over twice in the final minute of regulation before O'Neal knocked away Ron Mercer's inbounds pass intended for Doleac near midcourt, chased down the loose ball and scored on a dunk to tie the game at 88 with 14.5 seconds remaining.

Doleac's shot bounced off the rim at the buzzer, sending it into overtime.

"I knew the other guys were going to pressure, and (Orlando) probably figured I wasn't going to pressure," O'Neal said of the steal. "I knew he was going to throw it and I went for it. I knocked it loose and just ran it down."

O'Neal's three-point play gave the Lakers a 93-92 lead, and his turnaround jumpers on consecutive possessions put Los Angeles ahead for good midway through the extra period.

The Lakers showed no adverse effects from playing for the third time in four nights, shooting 60 percent in the opening quarter en route to a 53-46 halftime lead. O'Neal led the way with 22 points, making 9-of-14 from the field and 4-for-6 from the foul line.

The Magic did a better job defensively against him in the third quarter, using double teams to force him to look for open teammates. O'Neal took only two shots in the period, scoring three points, and the Lakers led 68-66 going into the fourth quarter.

Orlando pulled even for the first time since midway through the first quarter when Pat Garrity's 3-pointer made it 86-86 with 45 seconds left in regulation. Armstrong's layup gave the Magic their first lead since 10-9 before O'Neal regained control of the game.