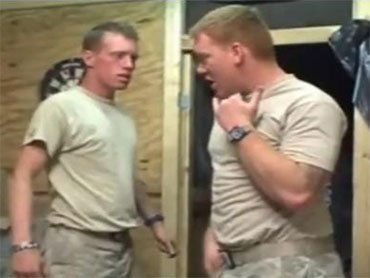 Aaron Melcher is a maintenance sergeant with the 4-73 Cav in the 82nd Airborne based in Western Afghanistan. He is also a choreographer and an excellent dancer -- as millions of viewers have seen around the world by watching him and his fellow soldiers perform Lady GaGa's "Telephone" on YouTube.

Melcher appeared on "The Early Show" Wednesday via Skype from Western Afghanistan.

He said he got the idea from his wife, who showed him the video before he was deployed.

Melcher explained, "Me and my co-partner Sgt. Baker, happened to be working on an engine in the motor pool, and we were thinking about something we could do to make some people smile back home, and I told them the Lady GaGa video was pretty hot, and we thought we'd remake it. That's what you got."

Melcher said he and his comrades were surprised when they got 100 hits on the video.

"We were all pretty blown away," he said.

Melcher said the response has also been favorable with his superior officers and and fellow soldiers.

"Everyone over here pretty much thinks it's the most hilarious thing they've ever seen," he told "Early Show" co-anchor Harry Smith. "Superiors back it up. It's a morale booster over here, sir."

So has the dancing troupe heard from Lady GaGa herself?

Melcher told Smith, "No, sir, we have not heard from Miss Lady GaGa yet. We are kind of hoping we would hear in the near future. My wife's a massive fan."

For more on Melcher's dancing history and how he choreographed the performance, click on the video below.