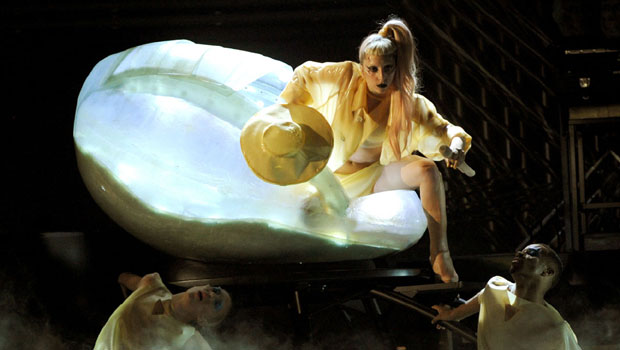 (CBS/AP) What will HBO have to contend with from Lady Gaga? Will it be anything as crazy as the meat dress or as inventive as the giant egg?

The network said Tuesday that it is taping two Gaga shows in New York's Madison Square Garden later this month for a concert special. The documentary of her "Monster Ball" tour will be televised on May 7, 2011, two weeks before the singer is releasing her new album, "Born This Way." The album's titular single was released Friday.

The woman who choreographed most of Gaga's videos, Lauriann Gibson, will direct the concert special.

HBO says that Gaga, who was carried into the Grammys on Sunday inside a giant egg, will put on some brand new moves for the special. Her most recent album "The Fame Monster" won three Grammys.

Lately, Gaga has had competition in the "wackiest dress" category, as Cee Lo Green showed up at the Grammys wearing a costume that looked like a Muppet walked through nuclear waste.

In an interview that aired on "60 Minutes" Sunday, CNN's Anderson Cooper said each time he met Gaga she surprised him with her candor and, of course, because she never looked the same twice.

In fact, she told "60 Mintues" she doesn't see herself as a pop star but as a performance artist. Her clothing and hair are a part of the production that is Lady Gaga.

Still, as a singer she's a force. On YouTube, the video for her song "Bad Romance" has been viewed more than 345 million times as of this writing.