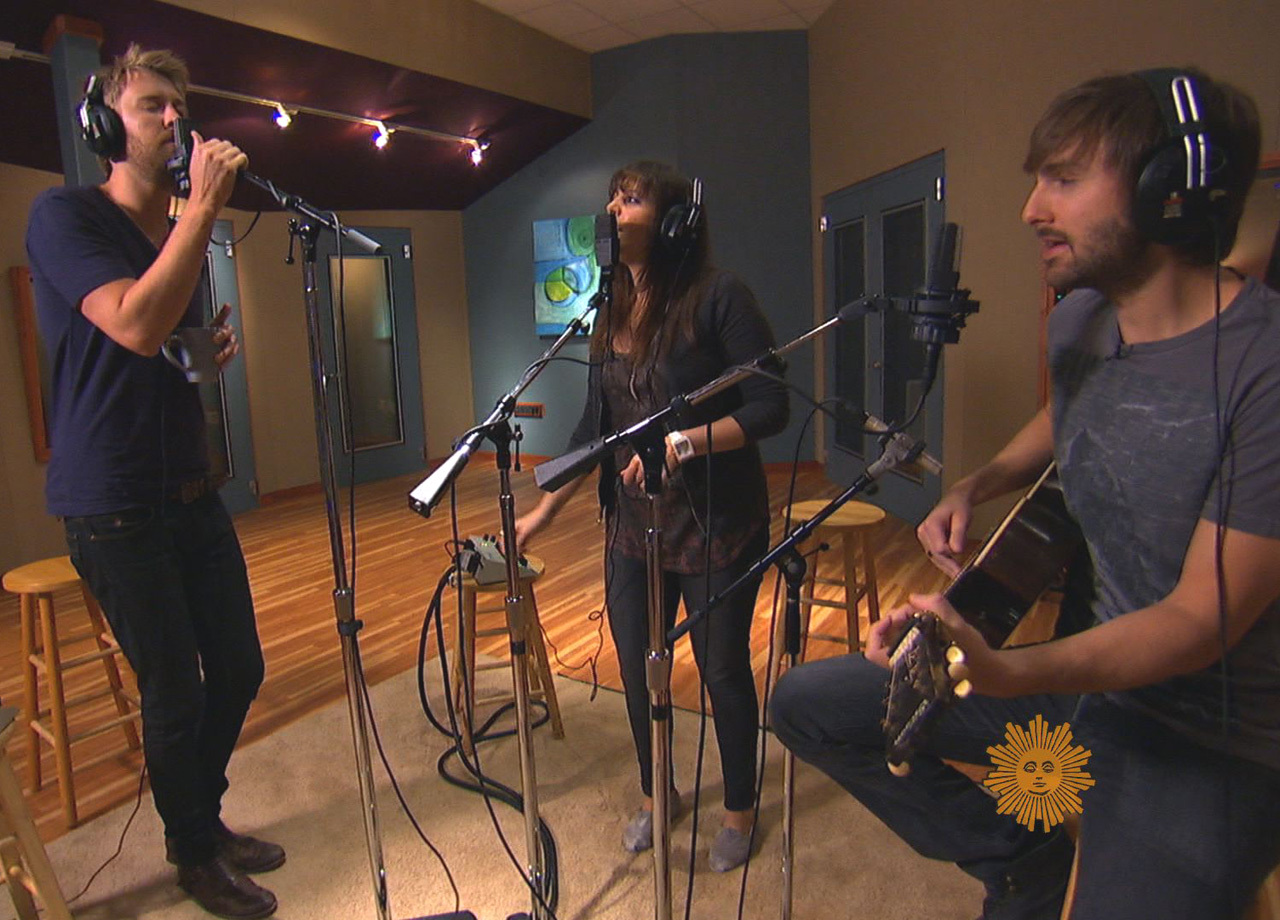 They're a Nashville trio that has pulled off a remarkable double-play, reports Ben Tracy:

Lady Antebellum is one of the hottest country and pop acts around. Last year's "Need You Now" was the second-bestselling album of the year.

Now they're out with a new record, "Own the Night," which debuted at number one on the Billboard charts.

The tracks on their new album are a mix of lost-love longing and Southern comfort - fitting for a band that Charles Kelley says is finally easing into its whirlwind success.

"We're hitting that stride of, 'OK, man, let's take a little pressure off. Let's really try to enjoy this, let's try to live in these moments that we're having and appreciate 'em,'" said Kelley.

After all, it's an odd twist of fate that these three ever even met.

As a Nashville native, country music has been in 25-year-old Hillary Scott's blood her whole life. Her dad is a musician; her mother, a singer who had a number one hit with Reba McIntire in 1993.

Hillary spent part of her childhood on the road touring with them.

"For kindergarten I was home-schooled, and I literally lived on the bus and would watch school on videotape," said Scott. "I would, like, cry when the school bus would go by. I'm like, 'I want friends that aren't 35!'"

By the time she was in high school, she was performing with her parents in an annual Christmas show.

"And I knew, after doing that for three years, if I can sing Christmas songs night after night for, like, two months straight, that I can definitely do this, you know?" Scott laughed.

"We've been buddies, you know, for 15 or more years now," Haywood said. "We grew up together in Augusta, Georgia. So there's just a comfort level of somebody you've known forever."

They played in cover bands together, attended the University of Georgia, and then began to write songs.

Their first attempt: "Carpe Diem is on Vacation." "It's pretty deep, if you think about it," said Haywood.

"We were really bad!" laughed Kelley. "I mean, it took a long time to really catch our stride. I was walking in the wrong direction.

For a time it looked like they might not make music again. Charles worked construction; Dave became an accountant.

But soon Charles moved to Nashville.

"He called me down in Atlanta and I was working in the corporate world, and was like, 'Man, I gotta get out of here, I'll do anything!'" said Haywood. "So we came up with no job and just writing songs every single day."

And then the Internet intervened. Charles posted some of those songs on his MySpace page. Hillary happened to find them, and then by chance ran into Charles in a bar.

"So I walked over to him and I was like, 'I'm Hillary, I'm a singer/songwriter from here in Nashville. I've heard your stuff and I just think you're great. Like, I just wanted to give you a compliment,'" she recalled.

"And I said, 'Well, let's get together and write some songs,'" Kelley said. "Thought I might get a little date out of it if nothing else."

"'You wanna get together and write?' But we actually did!" said Scott. "And that's ALL we did. And we've never stopped. We haven't stopped.)

"Literally, from the day we met Hillary, it just felt like something was different," said Haywood. "And it's always had a really, really special and unique feeling."

Kelley said the first time he was really proud of a song was the first song we ever wrote together: "All We'd Ever Need": "I just remember going, this is it. This is a song right here!"

What they needed next was a name.

"Okay we got a lady. Lady, lady ... Lady this, Lady this. Lady guy? Two guys 'n a girl? Blah blah, and you throw out all these names," said Haywood.

Clearly they were stumped, until one day Charles and Dave came face to face with some antebellum-style homes.

They eventually sold her on the name. "I was like, 'Okay, fine,'" said Scott. "If we are lucky enough to get a record deal it will probably be the first thing to change."

"We were sure that it would be the first thing to go," said Haywood.

Lady Antebellum played together for the first time at the Nashville bar 3rd and Lindsley, performing a song ("Love Don't Live Here") that would become their first hit.

Others quickly followed ... and then they REALLY struck gold, or in this case, multi-platinum.

A little ditty about a late-night call to a former flame set the band on fire. "Need You Now" has become the most downloaded country song EVER.

"How shocked were you by how giant this song got?" asked Tracy

"I think we had no idea," said Kelley. "Just to give you an example of 'We had no idea,' we almost didn't record it."

"The song's essentially a drunk dial to an ex," said Tracy. "Why do you think it resonated with so many people?"

"I guess everybody's been there," said Haywood.

Scott added: "Whether they want to admit it or not, you know?"

"When you wake up now, does it feel real? Does it feel earned?" asked Tracy.

"Parts of it," said Scott. "There are some parts, though, that just are the most overwhelming feeling - like the Grammys, for instance."

At last year's Grammys, "Lady A," as their fans call them, took home FIVE awards, including Record of the Year and Song of the Year for "Need You Now."

"I'll never forget waking up the morning after the Grammys just laying there looking up at the ceiling going, did that really happen?" said Scott.

"We knew the most productive thing we could do after that amazing night is to get back to work and to get back into the studio and focus on the music, because if that isn't there, everything else is going to suffer," Scott said.

At work on their new album, the group admitted to some nerves.

"We'd be lyin' if we said there wasn't pressure. But this is so much fun for us and we love creating," said Haywood.

The "two guys and a girl" of Lady Antebellum are savoring success they hadn't planned on quite so soon.

"There are so many other artists who are so unbelievably talented, and for whatever reason, we're the band from Nashville that has shined through," said Scott. "And we don't take that for granted, you know? And we truly appreciate that. It's validating, but it's also, Why us? You know?"