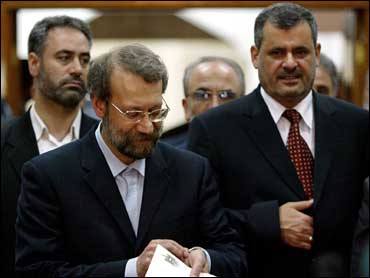 As the Labor Party on Friday selected as Israel's next defense minister an ex-general who warned the Palestinians that he will enforce tough new rules, four Palestinians died as new violence raged in the West Bank and Gaza Strip.

Two Arab motorists with Israeli license plates were wounded in a shooting ambush at a West Bank gas station, apparently by Palestinian militants. The firing continued as paramedics tried to evacuate the two.

Nine Palestinians were wounded by live fire in confrontations with Israeli troops.

A senior aide to Palestinian leader Yasser Arafat accused Israeli troops of stepping up attacks on Palestinians. "The new Israeli government should restrict the actions of the Israeli army in order to pave the way for peace talks," said the aide, Nabil Aburdeneh.

The Labor party's choice, Binyamin Ben-Eliezer, 65, will serve in hard-line Prime Minister-elect Ariel Sharon's government, along with Salah Tarif, a Labor legislator who became the first Arab named to an Israeli Cabinet.

Tarif, 47, was hoisted in the air by supporters when the results were announced. A member of the Druse minority, followers of an off-shoot of Islam, Tarif could barely speak. "I'm surprised," he said. "I'm choking with emotion because it's the first time an Arab has become a minister in the state of Israel."

Ben-Eliezer, who in the 1980s headed the Israeli military government in the West Bank and Gaza Strip, blamed the Palestinians for five months of fighting that has killed 415 people, including 342 Palestinians, 58 Israeli Jews and 15 others.

He said he was a peace pioneer, but regretted that "the Palestinians upended the (negotiating) table ... and turned to bloodshed."

He said he would adopt a tough stance. "I will do everything to make them (the Palestinians) understand that there are rules in this game, and these rules will be absolutely clear," he said. "There cannot be a situation in which we hear every day of another death and another death."

The Iraqi-born Ben-Eliezer was picked for the defense post by Labor's 1,600-member Central Committee, along with seven other Labor legislators who will serve in Sharon's Cabinet. Elder statesman Shimon Peres was chosen as foreign minister.

Ben-Eliezer, who served as communications minister in the Barak government, has been a parliament member since 1984. He opposed Israeli's withdrawal from Lebanon in May, saying it would create a vacuum and spawn more violence.

Some Labor activists worried that Ben-Eliezer was too hawkish to serve as a counterweight to Sharon.

Two far-right parties announced Friday they would join Sharon's government. Rehavam Zeevi of the National Union Party, who has advocated the "transfer" of Arabs from Israeli-controlled areas, will be tourism minister. The Israel Beiteinu Party picked Avigdor Lieberman - who has advocated bombing Tehran and Egypt - to serve as infrastructure minister.

The Labor Party chose former general Binyamin Ben-Eliezer for the coveted post of defense minister Friday, and he immediately called on Palestinians to curb violence and talk peace.

U.S.-mediated negotiations have collapsed following the start of a Palestinian uprising against Israeli rule last September. At least 337 Palestinians, 62 Israelis and 13 Israeli Arabs have been killed.

A sign of how seriously Washington views the situation came from U.S. Ambassador to Israel Martin Indyk, who said the Palestinian economy was on the brink of collapse, Arafat's administration was starting to disintegrate and there was a risk of "an even bigger explosion."

"I fear we are on the brink of a more serious situation" Indyk told a group of businessmen and diplomats. "The volatility of the situation contains within it the very real potential for an even bigger explosion."