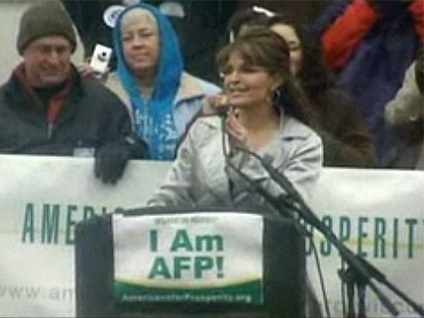 MADISON, Wis. - After weeks of relative quiet following the bruising battle over an anti-union collective bargaining bill, the state Capitol was again the scene of protests and counter-protests.

Speaking at the tax day rally outside the Wisconsin Capitol, Palin called the crowd in Madison courageous for having stood up to "death threats and thug tactics" of those who opposed Gov. Scott Walker's collective bargaining bill.

"You held your ground, your governor did the right thing, and you won," she said.

Referring to herself as a former union member and the wife of a union member, Palin said, "He's not trying to hurt union members. Hey, folks, he's trying to save your jobs and your pensions!"

She said union leaders don't care if their members are laid off, in order to protect their own power.

She also criticized President Obama for his budget plans, including proposals to invest in "really fast trains and solar shingles."

People on the edges of the rally argued with one other over the size of government and corporate power.

In contrast to the demonstrations at the Capitol in February for and against Gov. Walker's budget bill, there was no fencing or massive security today.

The Capitol police estimate about 6,500 people were on the Capitol grounds and vicinity by about 12:30 p.m. Saturday, reports CBS Affiliate WISC.

There were no reports or arrests, according to the state Department of Administration.

James T. Harris, the Tea Party event's master of ceremonies, said that the rally is meant to drive home a message.

"We are Americans, we love this country and we do not want to see if spent into oblivion," he said.

The rally is sponsored by Americans for Prosperity, a conservative front group.

Liberal leaders mobilizing the counter-rally urged people to show up with puppets to underscore accusations that Walker and Palin do corporations' bidding, said WISC, and asked supporters to bring cowbells and sleigh bells.