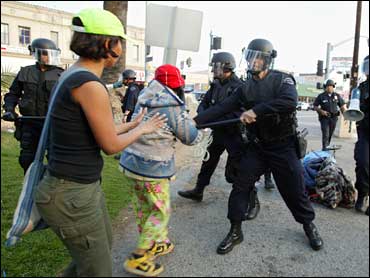 The Los Angeles City Council approved a $12.85 million payout Wednesday for demonstrators and bystanders who were beaten by police at a pro-immigration rally, one of the largest settlements ever for police department misconduct.

The payout will settle nine lawsuits filed on behalf of nearly 300 people after the May 1, 2007, rally at MacArthur Park, where police dispersed crowds by beating people with batons and firing at them with beanbag rounds and rubber bullets. Forty-two people were injured, including nine journalists.

Carol Sobel, an attorney who represented some of the injured parties, said the payout is the largest single settlement in a demonstration case in the country.

"It means that for everybody who was in MacArthur Park that day, they can now feel that their injuries were recognized by the city," Sobel said.

The council faces other legal troubles stemming from the rally: There were 27 pending cases related to the demonstration before the settlement. City officials, however, said the payout covers most of the people who have filed lawsuits, including a class-action lawsuit that involved the approximately 5,000 people at the rally.

Nick Velasquez, a spokesman for the city attorney's office, said the settlement also calls for more police training on handling rallies and protests.

The May Day rally turned violent when about 30 protesters threw rocks at officers, who responded with force. A massive investigation was launched after widespread criticisms that police used excessive force and violated civil rights.

Police later concluded that a lack of planning, training and orderly supervision hindered officers at the rally. Police Chief William Bratton took responsibility for the department's response and called the officers' decision to use force a "command and control breakdown." Four officers were fired and 11 were disciplined.

The Mexican American Legal Defense and Educational Fund, among the groups that provided attorneys for the lawsuits, said it will work with civil rights groups and city leaders to help restore people's confidence in the Police Department.