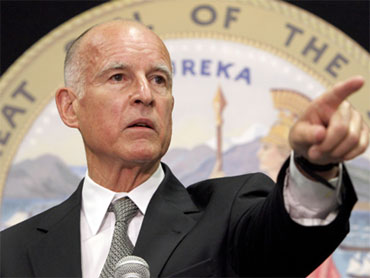 The beleaguered Bell City Council has voted to slash its salaries by 90 percent, and two members say they will not seek re-election when their terms are up.

The council voted unanimously Monday to set every member's salary at what Councilman Lorenzo Valez is paid — about $8,000 a year. The other four council members have been making about $100,000 a year for their part-time service on the City Council of this modest blue-collar city of about 40,000 residents.

Mayor Oscar Hernandez and Councilman George Mirabal said they would not seek re-election when their terms are up.

Hernandez also said he would take no salary for the rest of his term.

The four officials each made about $100,000, a finding that has prompted backlash from the community and an investigation by the California attorney general.

Bell's city manager, police chief and assistant city manager all resigned at last week's City Council meeting, days after it was revealed they were making salaries of several hundred thousand dollars each.

Bell is a poverty-stricken city southeast of Los Angeles with about 40,000 people.

State Attorney General Jerry Brown announced he will hold a news conference to disclose new developments in his probe of excessive salaries in the 2-square-mile city southeast of Los Angeles.

Hundreds of residents were enraged to learn last week that the three administrators who later resigned were making a total of more than $1.6 million a year.

"The fight doesn't end here," said Ali Saleh, who co-founded the group Bell Association to Stop the Abuse after the salaries were revealed. The group has now threatened to recall the council members if they don't resign or lower their own salaries.

Nearly 300 raucous protesters marched Sunday to the homes and workplaces of the mayor, vice mayor and two council members yelling "Fuera!" or "Out!" Some carried signs and wore T-shirts proclaiming, "My city is more corrupt than your city," and passed out fliers urging people to attend the council meeting.

The salaries exploded into public view after a Los Angeles Times investigation, based on California Public Records Act requests, showed the city payroll was bloated with six-figure salaries:

If there is a recall, Saleh said his group would like Velez to stay on the council and work toward reforming government in the city of 40,000, where one in six people live in poverty and about half are foreign-born.