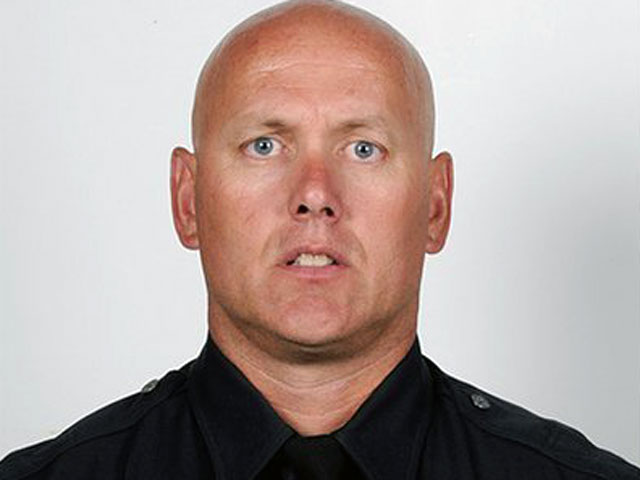 (CBS/AP) LOS ANGELES - A man suspected of wounding a Los Angeles police officer answering a domestic violence call was found dead Monday evening in his house where he was holed up in an hours-long standoff.

Officers found the man's body in a second-floor hallway at about 7:30 p.m. with a rifle nearby, according to the Los Angeles Police Department. It was not immediately known how he died.

Earlier Monday, officers blasted tear gas into his home in a gated community and traded gunfire with the man suspected of critically wounding Steven Jenkins.

Officers for hours tried to persuade the gunman to give up peacefully.

"We took extra time and explained to him ... that the officer was alive, that there's no reason to make this worse than it already is and to surrender," said Deputy Chief Kirk Albanese said. "That was not to be."

The man, who was not identified, was holed up in the Sylmar home for about 18 hours, with police officers and sheriff's deputies in armored vests and helmets surrounding the dwelling.

Police were using a forklift-like machine with an extendable arm to rip open some of the building's second-floor to make the gunman easier to spot, police Lt. Andy Neiman said.

"He fired at officers several times during a 45-minute period," Neiman said by phone as the standoff stretched into the early afternoon. "He obviously couldn't care less about the lives of others."

Officers returned fire at one point, but it was unclear whether they hit the gunman, Neiman said.

The man had been seen moving throughout the house and used several weapons, but officers lost sight of him.

Though the suspect had a criminal history, it was relatively old, according to Albanese. The LAPD will launch an investigation into the standoff.

"What prompted this? What caused this man to do the things that he did today? We don't know, and hopefully we can learn more in the days to come ... and really start to put together what we were faced with here tonight," Albanese said.

Jenkins, a police dog handler and 22-year veteran of the Los Angeles police force, was shot through the jaw and near the collarbone. Jenkins was hospitalized in critical but stable condition, and some of his colleagues, including his partner, donated blood to help him.

The standoff began Sunday night after a woman called 911 to report that her husband had beaten her, police said.

She was badly battered, police Chief Charlie Beck said. Neiman said she was treated at the scene for scrapes and bruises to her face and neck.

Because someone was reported injured, firefighters responded and saw the man driving up and down the street, apparently looking for his wife, Neiman said.

The man had locked himself in the home by the time police arrived. Neighbors were evacuated as SWAT officers surrounded the home.

Jenkins was shot at around 2 a.m. Monday.

Around 10 a.m., police fired tear gas into a second-story window but failed to force out the gunman.

No other officers were hurt.

Jenkins' wife is an LAPD sergeant and his son is also on the force.